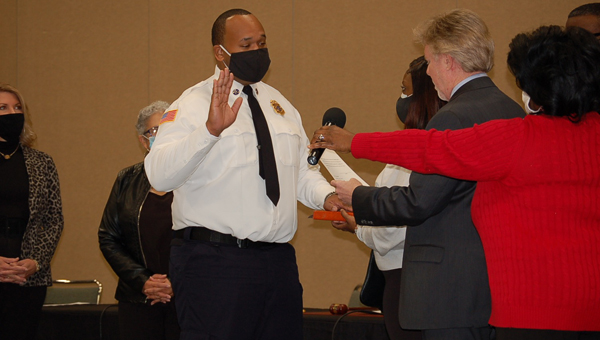 NATCHEZ — City of Natchez officials bid farewell to Natchez Police Chief Walter Armstrong just before a new police chief and fire chief took their oaths of office in a special-called meeting on Friday at the Natchez Convention Center.

At the beginning of Friday’s meeting, Natchez Mayor Dan Gibson read aloud two letters — one United States Attorney for the Southern District of Mississippi, Michael Hurst Jr. and the other from Mississippi Gov. Tate Reeves — congratulating Armstrong on his retirement and thanking him for his years of service.

Armstrong was then presented with a Key to the City and his chief badge.

“Without a doubt, this is an exciting day,” Armstrong said before thanking city officials for their support.

Armstrong said throughout his law enforcement career spanning a little more than 37 years, he has slept with his phone turned on beside his pillow waiting for the next call.

“For the first time in a number of years, the cell phone will be turned off before bedtime and will not be turned on again until the next morning,” Armstrong said.

Also during Friday’s meeting, Robert Arrington who started at the Natchez Fire Department in 2004, took his oath of office as the next Natchez Fire Chief and Joseph M. Daughtry Sr. as the new Natchez Police Chief.

Daughtry, who was the chief of the Pelahatchie Police Department before his arrival in Natchez, has worked 25 years in law enforcement in various capacities and is the second vice president of the Mississippi Association of Chiefs of Police.

No other actions were taken during Friday’s meeting.

Tuesday’s regularly scheduled meeting of the Natchez Mayor and Board of Aldermen has been canceled for Christmas and New Year’s Day holiday weeks, Gibson said. The board’s next scheduled meeting day is Tuesday, Jan. 12.