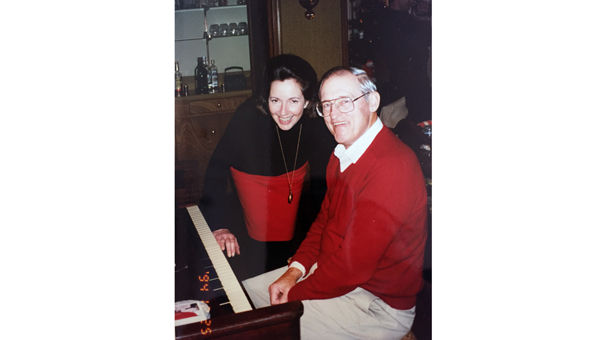 Ferguson would play the piano while the rest of the family would sing along. (Submitted photo)

NATCHEZ — Audrey James “Pap” Ferguson, who died Wednesday at the age of 85, was talented and active in different aspects of life, friends and family members said.

Ferguson was a Rotarian, a geologist, an outdoors man, an athlete, a Christian and a musician. Ferguson could play the piano and the saxophone by ear with a blues style, said Susanne Avondet, his daughter. The family would sing “Do your ears hang low” while Ferguson played the piano, she said.

Born in Woodville on April 26, 1935, Ferguson worked hard on his family farm after his father died. Ferguson’s family farm was close to his future wife Edna’s family farm, Avondet said. When they were younger, Edna would bring Ferguson fresh baked cookies as he fished.

As an athlete, Ferguson earned a scholarship to play baseball at Southwest Mississippi Junior College. Ferguson chose not to play sports at Louisiana State University and focused on academics instead, Avondet said. Ferguson earned a Bachelor of Science degree in geology from LSU.

A big fan of sports, Ferguson supported Trinity Episcopal Day School athletics, Avondet said, and the family followed the Trinity basketball team throughout the state in 1974, watching Trinity win every game in their 36-0 season.

Avondet said her father also loved golf, tennis and racquetball. Once Ferguson won a racquetball tournament in Natchez. Golf gave Ferguson a chance to travel and to see Tiger Woods sink a chip shot on the 16th hole to win The Masters at Augusta National Golf Club in 2005.

David Bramlette said Ferguson served with distinction at Trinity Episcopal Church where he was a member for 60 years and in the Rotary Club of Natchez where he was a past president. Ferguson was a board of directors member for Britton and Koontz bank, and a Trinity Day School board of trustees member.

Ferguson had a romantic side, Avondet said. He wrote love letters to his future wife Edna and convinced her to leave LSU to marry him 60 years ago. Avondet said Ferguson was very affectionate toward his wife and enjoyed spending time with her on a dock at Lake St. John in his final months.

Ferguson was a father of three daughters Avondet, Amanda Jeansonne, Charlotte Murrell and a son Jim Ferguson. Avondet said her fondest memory of her father is a time he dropped her off at Trinity Nursery School and she did not want to go.

“I remember holding onto that leg, and he didn’t know what to do,” Avondet said. “He didn’t want to leave me but he did not know what to do. We had to go into the bathroom and he had to talk me through it.”

Riding with her dad to check on oil wells late at night is another fond memory for Avondet. Avondet said Ferguson’s work in oil was very important to him. He spent his career exploring the Wilcox formation in Mississippi and Louisiana. He first worked with Richard Campbell in Vidalia and was a founding member of Energy Drilling in March 1976.

Avondet said everything Ferguson was involved in he was asked to lead, and he was not one to speak about himself. He just wanted to be the best at whatever he did, Avondet said.

“He modeled for us the loyalty, the love of nature and music, the importance of good friendships and the love for others,” Avondet said. “He had a love for the Lord and for his Family.”