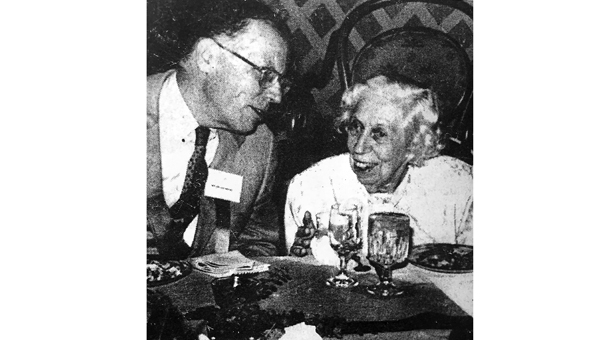 Late Gov. William Winter chats with Eudora Welty at an event at the Carriage House Restaurant June 9, 1990, during the first Natchez Literary Celebration. Winter introduced Welty at the event before she read her short story "A Worn Path." The two received thunderous applauds. Winter died Dec. 18 at the age of 97. (Submitted photo)

NATCHEZ — The late Mississippi Gov. William Winter, who died Dec. 18 at the age of 97, was an early proponent of the Natchez Literary Celebration, a founder of the event said.

Carolyn Vance Smith dreamed up an idea for the Natchez Literary Celebration, a conference that features themed-based literature in 1990.

Smith said the conference became a success because of Winter’s dedicated service to the annual conference from the first year on.

Letters from Winter to Smith said the Natchez Literary and Cinema Celebration was the highlight of his year, Smith said. Winter would celebrate his birthday at the conference that he attended with his wife, Elise.

Winter served as director of proceedings at an event during the first Natchez Literary Celebration held June 9, 1990, at the Carriage House Restaurant. The event featured famed Pulitzer Prize-winning Mississippi writer Eudora Welty and Winter introduced her.

“The place was packed,” Smith said. “Miss Welty read aloud her famous short story, ‘A Worn Path,’ which is set in Natchez and on the Natchez Trace. The place was packed. After her reading, she received a thunderous standing ovation that lasted and lasted. Gov. Winter likewise received standing ovations every time he served as Director of Proceedings. He was so deeply respected and so deeply loved. The two famous Mississippians helped Copiah-Lincoln Community College in Natchez found the celebration.”

Marion Smith, Carolyn Vance Smith’s husband, first met William Winter at the University of Mississippi in the early 1950s, and both were members of the Phi Delta Theta fraternity, Marion said. Winter was elected to the state Legislature in 1947, and had to take a semester off when the State Legislature was in session.

Winter was a driving force for opening the Museum of Mississippi History and the Mississippi Civil Rights Museum located in Jackson, Marion said. Since the museums opened Marion said he has toured both museums and they are a piece of Winter’s legacy.

“Mississippi is tremendously better off because of what he did,” Smith said. “He really was a true statesman. It was never for himself, it was always for the betterment of the state.”