The Dart: Golfing is life for Wilson 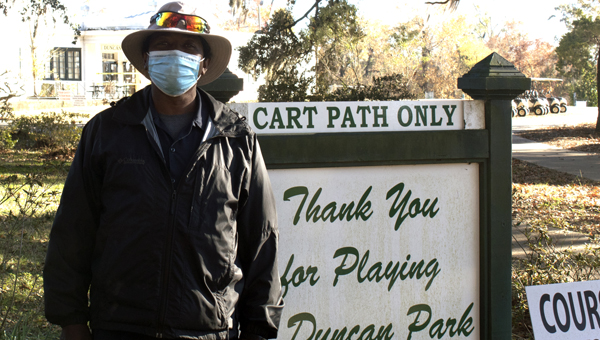 NATCHEZ — In his nine years of playing golf, racking up three holes in one has been a highlight, said Kelly Wilson.

Wilson, a Ferriday native, said he picked up the game after watching Tiger Woods.

“You can play a lifetime and never get one,” Wilson said. “To have three, it is like a lightning strike. Like holding lighting in a jar. It is a top honor for me.”

Wilson, 62, plays the Duncan Park Golf Course, where The Dart landed Friday, twice a week and has done so for the past seven years, he said.

Duncan Park is a public facility and a round of golf cost approximately $20 including a cart, and $14 for walking the course.

To play a game of golf perfectly you would need to birdie every par 3 and par 4 hole and eagle every par 5 which would be around 26 under par, Wilson said. To get under par for the course is another challenge Wilson has not accomplished yet.

Basketball was the last sport to fall. Wilson’s talent and age, he said, prevented him from playing.

Wilson said he enjoys the challenge of playing golf. Wilson said he gets his cardio in by walking around the course with a pushcart for his clubs.

“For the most part, the course is challenging and the game itself is challenging,” Wilson said. “It has so many different dynamics, nothing is the same. Basketball has a 100-foot court; the rim doesn’t move. Golf is altogether different … it is different every time, every hole is different.”