Forks of the Road funding approved by Congress 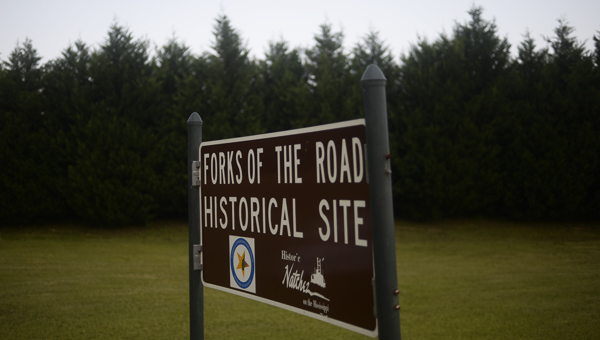 The sign at the Forks of the Road Historical Site in 2014. (File photo)

NATCHEZ — The long-awaited Forks of the Road Slave Market District of the Natchez National Historic Park is one step closer to reality.

Monday night, Congress overwhelmingly approved funding needed to complete the land acquisitions for Forks of the Road, a site that was once the second largest slave market in the Deep South. The appropriations bill is now on the President Donald Trump’s desk. He is expected to sign it soon.

“We are very excited that the many years of hard work, on behalf of so many people, has finally paid off,” said Dan M. Gibson Natchez mayor. “Over 20 years ago, Natchezian Ser Seshsh Ab Heter-CM Boxley, and his Friends of the Forks of the Road Society, began working to bring proper recognition to this important site of our history. And for the better part of the past 15-plus years, Kathleen Bond, Superintendent of the Natchez National Historical Park, has worked to support Ser Boxley in making this site a part of the National Park Service.”

Gibson also expressed appreciation to Ricky Gray, president of the Adams County Board of Supervisors, and Natchez/Adams lobbyists, former US Congressman Gregg Harper and Manning McPhillips, for the hard work it took to make sure funding was included in the final bill.

“We are so very grateful to our own U.S. Rep., Michael Guest, our Sens. Roger Wicker and Cindy Hyde-Smith and even those members of our delegation who don’t represent Natchez and Adams County,” Gibson said. “They all supported this project 100%.”

Gibson said Gray, Harper, McPhillips and he would be working with the National Park Service and Bond to determine the final funding amount.

“We understand that it’s exactly what we need to acquire the property,” Gibson said. “The City of Natchez has already donated nine parcels it owned to the NPS — we are now well on our way.”

Gibson said the Forks of the Road Slave Market District will be an 18-acre site and the only such site in the entire National Park System.

“It speaks volumes of the progress that has been made in Natchez over our past 304 years,” Gibson said. “We are now a city celebrating diversity and cultural and racial harmony. We couldn’t be more excited about our future.”

Ferriday police search for man in connection to murder