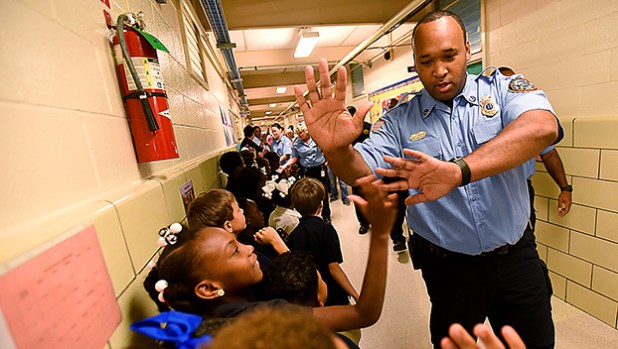 Natchez firefighter Capt. Robert Arrington gets a few high-fives from the students in this file photo. Arrington is settling in to his new job as Natchez Fire Chief. (File Photo, Natchez Democrat) 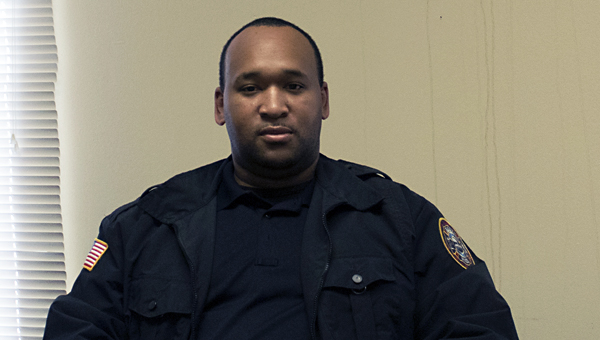 Natchez new Fire Chief Robert Arrington sits in his new office. He is starting to settle into the job. (Hunter Cloud for The Natchez Democrat)

NATCHEZ — After serving 16 years as a Natchez firefighter, Robert Arrington is embarking on a new chapter in his career — Natchez Fire Chief.

Arrington’s carreer in firefighting began 16 years ago when a friend of his tried out for a position in the Natchez Fire Department and encouraged Arrington to try out as well.

It did not take long for Arrington to become enamored with the physical and mental challenges of the job, Arrington said.

“I think after my first one or two shifts I was in love with it,” Arrington said of being a firefighter. “It was the excitement of the job, knowing you are helping people. I had been doing other jobs that didn’t give me that same fulfillment. I was a young 20 year old excited to see the lights and ride the fire truck. I fell in love with it.”

A Natchez native, Arrington said he has lived in Natchez his whole life, having graduated from Natchez High School in 1999 and joining the Fire Department at the age of 23. Now 39, Arrington is married to his wife, Allison, and they have two children, a son, Jared, 6, and a daughter, Journee, 2.

Arrington said the children do not care if he is a fire chief, they just like to see the fire trucks.

Arrington said his primary goal as fire chief is to improve Natchez’s fire rating. Fire ratings are assigned to fire departments based on a total score out of four categories: emergency communications, fire department, water supply and community risk reduction.

Fire ratings, based on a scale from 1 to 10, with 1 being the best rating a fire department can achieve and 10 being the worst, help determine insurance rates for property owners.

Natchez’s fire rating is currently a 5, but Arrington said he believes he can get the rating down to a 3.

Natchez purchased a new ladder fire truck in July 2019, which will help with the city’s fire rating, and Arrington said getting more people on the department also would help improve the rating.

Arrington said his first weeks as fire chief have gone smoothly, but he is still trying to adjust to the new position.

“I’m still a fireman at heart,” Arrington said. “This is still awesome. I love it.”