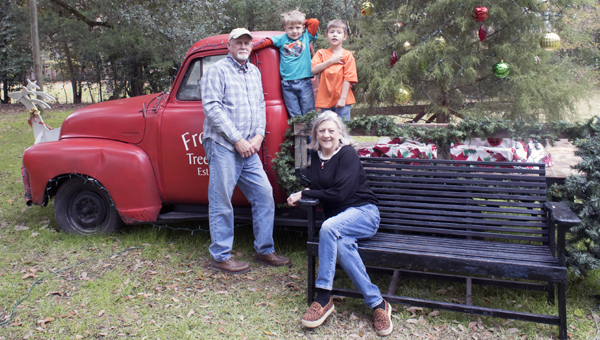 Forrest Foster and Debbie Foster pose with their grandsons Chase and Will by the 1953 Chevy Truck in their front yard on 5 Fatherland Drive.

NATCHEZ — Forrest Foster said he saw a rusty blue 1953 Chevy truck at Natchez Salvage and assumed it was going to be crushed.

He bought it, brought it home and put it in the backyard of his house on Fatherland Road where The Dart landed Wednesday.

“I didn’t want to see it go away. That is the only reason I bought it,” Foster said. “It is a piece of history.”

Foster was born in Natchez in 1952, has worked with cars for 40 years and has owned Rapid Recovery and Tow for the last four years.

For five years the 1953 Chevy sat in the backyard. His wife, Debbie, had the idea to decorate it for a Christmas display last year, Foster said. Forrest and Debbie bought paint and painted it red.

The Fosters had a specially made decal placed on the door that says “Frosty’s Tree Farm Est. 1953,” and they put a tree in the truck bed. Forrest moved the truck to the front yard using his wrecker.

The truck does not run and Forrest made a bed for it out of plywood. Forrest said his goal is to restore the truck one day. The restoration would take approximately 6 months to a year, Forrest said, adding to fix it completely it would cost about $20,000.

Forrest has three other project cars, a 1969 Camaro, a 1991 Grand Cherokee Unlimited and a 1977 C-10. Time and money are the only limitations to his progress on the vehicles, he said.

The Fosters said they are afraid if they put the truck out for other holidays it will lose a special meaning, so the truck will only be out for Christmas. Debbie and Forrest plan to add to the truck for the next Christmas so families will have something different in their photographs.

“Last year we didn’t have lights around the truck, the tree wasn’t decorated and didn’t have the garland on the bed,” Forrest said. “It would be nice to have a big ole Stuffed Santa sitting in the seat with his arm resting on the window, but we will see.”