The Window, an original Christmas story by G. Mark LaFrancis 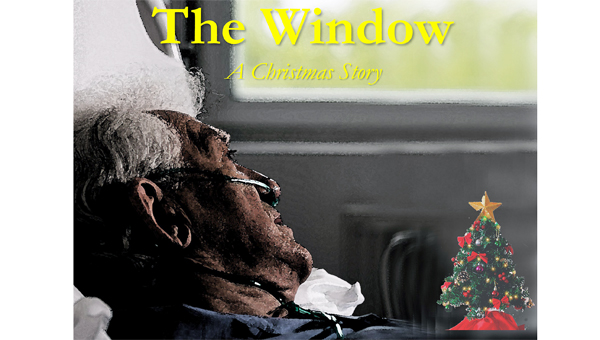 Editor’s Note: Each year, local author G. Mark LaFrancis writes an original Christmas story and shares it with our readers. Here is this year’s story “The Windows.”

or goodness sakes, where is that boy?” I hollered to my wife.

I was atop a ten-foot ladder trying to string Christmas lights on the ridge of our house. A whole strand had burned out and my teenage son was fiddling somewhere.

In his hands were strands of lights, all tangled together like fishing line.

“I tried to untangle them Dad, but…”

I grabbed the lights from his arms. “I guess you just couldn’t do the job,” I barked.

He lowered his head. “Sorry, Dad.”

I wrapped my arm around his shoulder.

“Sorry, Son, I’m upset because we got news your PawPaw was diagnosed with the COVID.”

Andre stood frozen. “PawPaw? But he’s been so careful in the nursing home. We haven’t visited him in months.”

“Well, a worker brought the COVID in from his home. Others in the home are infected, too.”

At that moment, when I broke the news, the tangled lights didn’t seem so important, nor did our annual tradition of decorating our house with a spectacular display.

“What do you want me to do with these?” Andre asked.

“Put them right there. We’ve got more important things to work on.”

When I was growing up, my dad was one of those light-lovers, inside and out. He popped a few circuit breakers in his time. And, like Andre has been to me, I was his apprentice – a sous chef of the spectacular – untangling the strands as he waited impatiently on the ladder.

“Never enough lights,” he’d say to Mom when she fussed.

So here we were in our kitchen with unfinished lights outside.

Andre sat still at the table. His mom, too. I paced.

I said, “We can’t visit. We can’t go into the nursing home. We can’t bring PawPaw home.”

PawPaw was the glue of the family. The corny jokes. The long, long stories of his childhood. The war stories he kept hidden. The outlandish Christmas displays, the hard-working life he inspired us to follow.

And now we couldn’t go to him in his direst need … to embrace him … to listen to his jokes, stories, inspiring words. It was as if PawPaw was on a remote planet somewhere where we couldn’t travel.

“Dad, duh, I’m not talking about inside, but outside.”

“Let’s go see him from the outside. We know his room. Let’s go say hi through the window.”

“Brilliant,” his mom said. “I’ll pack a lunch, and Dad, get chairs out of the shed…and…and,”

Before you know it, we were marshaling stuff like a general going to war. This time, it was to a war to bring PawPaw cheer in the face of COVID, the dastardly disease that took so many lives. We had chairs, a lunch basket, blankets, and stuff packed into the van.

The next morning, we headed to the home where PawPaw lived. I had checked the day before with the home and they agreed to let us set up outside PawPaw’s window. They said we would lift his spirits.

Andre raced to the window. He looked in intently. “PawPaw,” he hollered, waving his hands.

PawPaw lay in his bed, an oxygen tank feeding air to him. He was motionless. On the table next to his bed was the small Christmas tree we brought to the home. He so loved Christmas and decorating, more like smothering, the tree with ornaments and lights.

We set up picnic-style outside his window. Sometimes he’d open his eyes and Andre would wave some more. We stayed for about an hour watching PawPaw.

Andre forced back tears in the van on the way home. I did, too, feeling I needed to stay there outside that window for whatever time it took to let PawPaw know we loved him, we were there for him, we would not leave his side.

At home, Andre and I didn’t finish the decorations. We barely ate supper before slipping to bed.

I wrinkled my brow.

“We will decorate his window. I went online last night and found battery-operated lights and lots of stuff,” Andre said.

I have to admit, he made sense.

“Okay,” I said, “Let’s launch Operation PawPaw.” I put Andre in charge of procurement. I took charge of logistics and Mom was in charge of sustenance.

In a few days the lights arrived. Andre had already designed posters to tape to PawPaw’s window, declaring our love for him.

We arrived in the morning to put up the lights and posters, and settled outside his window as the lights glowed, and we enjoyed our picnic. PawPaw didn’t move, but we felt as though he knew we were there.

PawPaw, Sergeant Leroy “Patty” Patterson, was a gunnery sergeant in the Army in World War II. He traversed the dangerous battlegrounds in Europe and wound up in the Battle of the Bulge, a major battle that turned the tide of the war but not without tremendous casualties. PawPaw lost several fingers in that battle, waged in sub-freezing temperatures, as our Allied forces fought the Germans. He didn’t talk about the war, telling us “not for your ears to hear.”

So here we were, witnessing his Battle against COVID.

“Sir,” said a voice. A man approached us.

“I’m the director here and while we admire your support for Mr. Patterson, well, we feel it’s not fair to the other residents,” the man said.

“I beg your pardon. We’re honoring a war hero in his darkest hour the best way we can,” I said.

The director said, “I understand, but the other residents, many who have no families like yours … well…”

“Dad! Dad!” Andre said, tugging at my jacket. “We’ll decorate all the windows.”

The director said, “Well, if that’s what you want to do. Fine by me.”

I looked at Andre, and asked “All the windows?”

He smiled at me. “What would PawPaw do?”

So, we ordered lights, bought garland, painted posters, got stickers, and began decorating window by window … all 120 windows.

With each window, we saw the residents’ reactions…some imperceptible, others tearful. Somehow, our effort reached the community. A church group came by to sing Christmas carols. A group of Santas came by waving through the windows. Groups brought blankets, socks, and Christmas cards.

Andre, Mom and I continued our visits outside PawPaw’s window. Once, he opened his eyes and I swore they sparkled like they did when he lived with us, sharing Christmas morning and dinner.

Two days before Christmas, I receive a call from the home. PawPaw, Sergeant Leroy “Patty” Patterson, survivor of the Battle of the Bulge, had passed away. The man who fought so many battles in the war, lost this one.

I doubled up and began to cry. Mom and Andre came to a group hug and cry.

Deep, deep grief enveloped me. In the coming days, we made arrangements for a military funeral, a final farewell. As his coffin was slipped into the resting place at the National Cemetery and “Taps” was played, I realized PawPaw was gone. I saluted. Andre did, too. I thought, “There goes an American hero.”

We came home, drained of emotion.

Andre went to the tangle of lights we had left on the porch. He began to separate the strands.

I got the ladder and began stringing them up on the ridge of the roof.

We worked in silence, both of us sealing in the pain of our loss.

As the strands were strung, we knew it was time to let them shine, just as PawPaw did in our lives.

I gave Andre the nod. He plugged in the lights, and wow. Brilliant glows illuminated our house and us. We hugged each other tight.

“PawPaw is with us tonight,” Andre said.