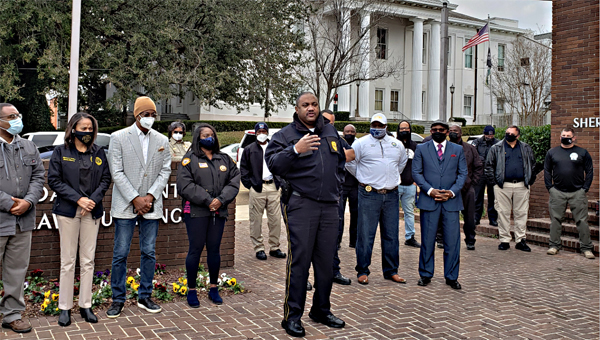 NATCHEZ — Community leaders from Natchez and Adams County prayed in front of the Adams County Sheriff Office in downtown Natchez on Wednesday morning.

The ceremony consists of Patten speaking and leading a prayer for the community. Patten said when the community leaders prayed they had no idea about the events that would transpire later in the day in Washington, D.C.

Patten said he believes prayer is one of the main ways to keep a community safe, but doing things the right way is another way to lead the community in the right direction.

Patten said he started the annual blessing of the building in 2016 when he first became sheriff because he believes in putting God first. Patten said he has blessed the Adams County Sheriff’s Office for four straight years.

“I believe personally in everything I do in putting God first,” Patten said. “I did not want to take office without dedicating it to God.”

“We are showing love for each other,” Daughtry said. “We are showing support for each other. I think it is a great start. We are just like family. We might not always agree, but one thing we agree on is we are going to serve this community in the best way we know how.”

Daughtry asked that the community keep community leaders, and first responders in their prayers. Patten said it is more important now than ever that people know community leaders are praying for Natchez and Adams County.