No. 1 Alabama looking for 6th title under Saban vs. Ohio State 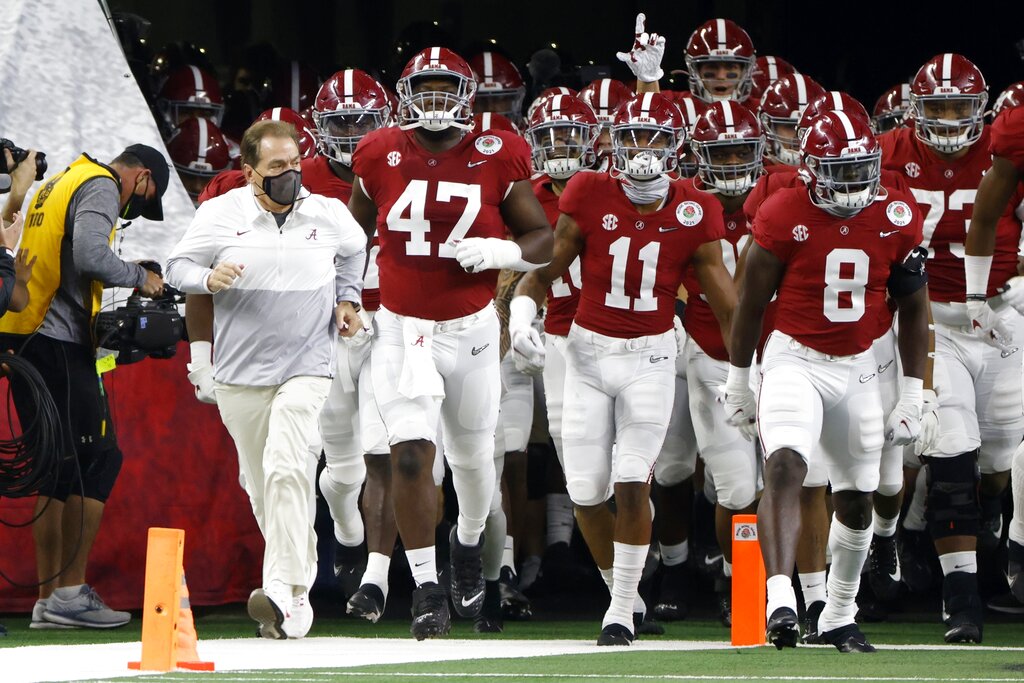 MIAMI (AP) — Trying to figure out which of Nick Saban’s Alabama teams is best is akin to picking Michelangelo’s greatest work of art or Ernest Hemingway’s best novel.

They are all excellent in their own way.

The first to win a national championship came in 2009 and is still the only Alabama team to finish unbeaten under Saban in 14 seasons of unprecedented dominance.

The 2011 national champions had maybe the greatest defense of college football’s modern era of high-powered offenses. The current Crimson Tide team has one of the most prolific and talented offenses in the history of the sport.

“Every team is different. Every team has its own personality,” Saban said Sunday. “But it’s hard to compare teams.”

The top-ranked Tide (12-0) are set to face No. 3 Ohio State (7-0) on Monday for the College Football Playoff championship in search of their sixth national title with Saban as coach.

The final game of this taxing and strange season played through the coronavirus pandemic is on schedule to take place at Hard Rock Stadium, home of the NFL’s Miami Dolphins, as planned.

Because of COVID-19, which caused the postponement or cancelation of nearly 130 games, nothing has been guaranteed this season. But Alabama arrived in South Florida on Friday and Ohio State got to town Saturday.

The usual day-before-the-championship-game news conference with the coaches was held Sunday morning via Zoom. No sharing of a stage, posing with the trophy and staged handshakes this year.

“It certainly has been a strange road to get here,” Ohio State coach Ryan Day said.

The Buckeyes faced the prospect of no fall football at all when the Big Ten postponed in August, and then they managed to get in only six games before making the playoff. Day acknowledged earlier this week that Ohio State was dealing with some new COVID-19 cases.

There was even some concern early in the week that the game might have to be pushed back.

If the Buckeyes do upset Alabama to win their first national title since 2014, they will have played the fewest games of any national champion since Minnesota finished 8-0 in 1941.

Alabama had only one game postponed this season, though it was because of COVID-19 issues with LSU. Saban tested positive for the virus — twice. The first time it was deemed a false positive after further testing and he was able to coach against Georgia.

The second time he had to miss the Iron Bowl against Auburn.
Otherwise the Tide dynasty has rolled along as close to business as usual as possible considering the circumstances.

“Our team has shown a lot of maturity and perseverance throughout the season,” Saban said. “We told our players basically the team that shows the maturity to be able to handle disruptions is going to have the best chance to be successful in the end, and consistency in performance is always a key to success, and that perseverance has shown up in the way we’ve been able to play with consistency.”

And consistently great against an unusually difficult schedule.
Because of the pandemic, the Southeastern Conference decided to play only league games this season. Facing 11 SEC games and Notre Dame in the playoff, the Crimson Tide have had an average margin of victory of 29 points. Only one of their games was decided by fewer than 15.

“This is a great offense. It is a complete offense,” Ohio State defensive coordinator Kerry Coombs said. “They have great players, but they also have a great scheme and they understand how to attack defenses. People have tried numerous different things against them, and they always have an answer.”

Another championship would give Saban seven overall, including a BCS title at LSU in 2003, breaking a tie for the most all time with Alabama’s other coaching great, Paul Bryant. The Bear won six championships in 25 years leading the Tide from 1958-82.
The 69-year-old Saban is 169-23 at Alabama, with no signs of slowing down.

“One of the best football coaches in the history of college football,” Day said.

HOW IS FIELDS FEELING?
The storyline of the week for Ohio State is how quarterback Justin Fields was doing after taking a brutal shot to the side in the second quarter of the Buckeyes’ semifinal victory over Clemson. Fields missed only one play against the Tigers and ended up throwing six touchdown passes.

But it’s a story with few details. Fields has said he was feeling better than expected the day after the game and he will be good to go Monday night.

Day provides no injury updates for his players, so it is still unclear exactly what the damage was to Fields.

“Justin has had a good week of practice,” Day said. “He’s done a really good job preparing, and I think that’s the thing that he felt like he did a good job going into last game, was just preparing at a high level, and he’s continued to do that this week.”

This will likely be Fields’ last game, as the junior is expected to be one of the first players selected in the NFL draft in April.