Ferriday native was on sidelines for national championship 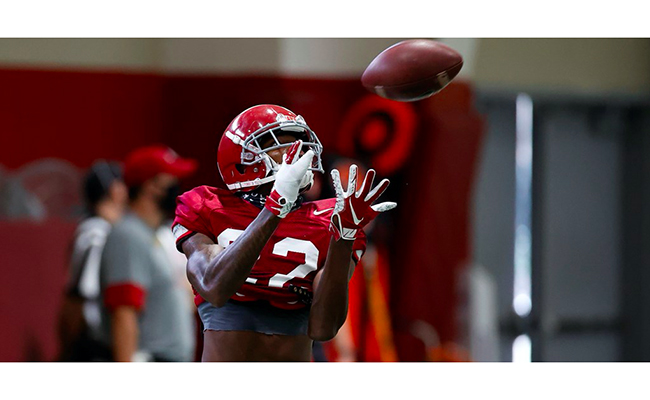 Ronald Williams Jr. makes a catch in an Alabama football practice. Ronald is a Ferriday native and just finished his junior year with the Crimson Tide. (Courtesy of Alabama Athletics)

Ferriday native and Alabama defensive back Ronald Williams Jr. was on the sidelines in Miami on Monday night’s national championship game against Ohio State University.

While Williams Jr. did not see any playing time, his father Ronald Williams Sr. said seeing his son on the field as Alabama won the national championship 52 to 24 was a dream come true.

Former Ferriday head coach Dwight Woods said Williams Jr. was a player who could play at the college level and possibly in the NFL level. Williams Sr. said his son was a Louisiana State University fan and wanted to play there until he was offered by Alabama.

Williams Jr. began his college football career at Hutchinson Community College in Hutchinson, Kansas, prior to playing at Alabama, where he is in his junior year. Woods said maybe Williams Jr.’s appearance in the national championship game could inspire other kids in Ferriday to strive for success.

“We are just as proud of him as we can be,” Woods said. “It just shows when you work hard and when you persevere. The only limit you have is if you limit yourself. He is one of those kids who we talk about. You can be anything, and you can be successful. He bought into it and he is experiencing it.”

Williams Jr. had to persevere when he first began his college career at Hutchinson Community College. He had a scholarship offer for the University of South Alabama but a missed ACT test delayed his scores and forced him to go the JUCO route. Woods said he encouraged Williams Jr. while he was at Hutchinson.

Current Ferriday Coach Stanley Smith recruited him when Smith was a coach at the University of Arkansas Pine Bluff. Smith said Williams Jr. was in the locker room for Ferriday’s 2019 State Championship game giving advice to the players. He said it means a lot to have a former player still be invested in the community of Ferriday.

Smith said while Ferriday is a small town most people would typically just drive through, having players represents the black and gold on the national level showcases the talent Ferriday has. Smith said he is proud of Williams Jr. for making it to the national championship game.

“We are proud of him. He used football as an avenue,” Smith said. “For those kids to reach that stage that speaks volumes of who they are, and where they have been.”