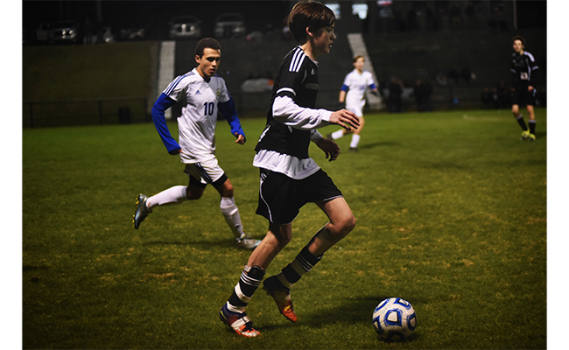 Cathedral’s head coach Dennis Hogue said the most impressive goal in their 3-1 win over Brookhaven Academy was the third and final goal.

The Green Wave’s Zach Mann timed a perfect run to get behind Cougar defenders and leapt into the air. Towering a foot higher than the defender marking Mann, Hogue said Mann connected with the ball, and directed a powered header into the top corner of the goal. Hogue said it was just past the outstretched hands of the goalkeeper.

“We really made a point to get all of our tall players in the box,” Hogue said. “He just got above everybody and knocked it into the top corner. It was beautiful, and it was probably the most beautiful goal of the game.”

Hogue said the team got out to a one-goal lead in the first half following Paxton Junkin’s deflected shot off of a Brookhaven Academy defender. At halftime, the Green Wave led by just one goal, but Hogue said his team should have been up more goals.

Jacob Moore scored the second goal of the night in the second half before Mann scored the team’s third goal. Hogue said the Green Wave were trying to exploit a weakness in the Brookhaven Academy defense and he was disappointed to not score more goals.

“At halftime we were actually up one to nothing and felt pretty frustrated,” Hogue said. “We had plenty of opportunities, but we just could not finish. We are actually a better team than what we were last night. We dominated the game.”

Hogue said the Green Wave’s win over Brookhaven Academy is crucial in the playoffs race because there are only three other teams in the district.

Cathedral has four district games left on the schedule. Two of those games are against cross-town rival Adams County Christian School Hogue said, and the others are one game against Brookhaven Academy and Oak Forrest.

Last week Cathedral lost to Oak Forrest 2-0. After their win over Brookhaven Academy the Green Wave have a 1-1 district record. Hogue said any loss this season is costly.

“There is no room for losses,” Hogue said. “To have two losses in this district you are pretty much out of it, you are in a deep hole.”

Cathedral will play at Adams County Christian Jan. 18 at 5:30 p.m. Hogue said the game will mean bragging rights in Natchez but could also impact the playoff race for his team.

Adams County Christian snapped a three game losing streak on Wednesday night defeating Manchester Academy 4-3 from the penalty spot after being tied 2-2 at the end of regulation.