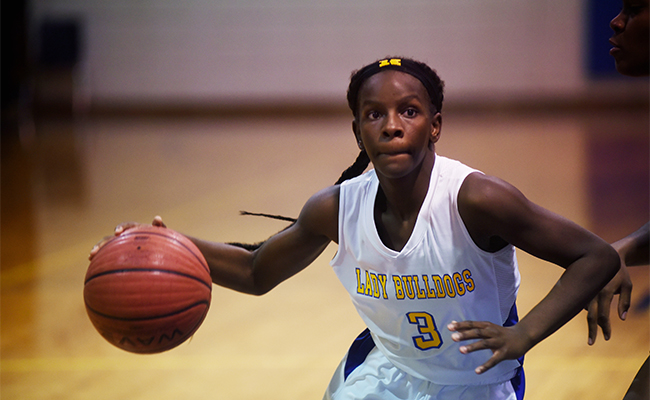 Kelsey McNeal is a senior point guard for Natchez High School and has had an explosive year offensively averaging 25 points per game. McNeal’s senior dream is to play at the Mississippi Coliseum in Jackson. (File Photo | The Natchez Democrat)

NATCHEZ — Natchez High School’s Kelsey McNeal scored almost as many points by herself as Forest Hill High School had as a team as the Lady Bulldogs defeated the Lady Patriots 47-31 last Friday night in MHSAA Region 6-5A action.

McNeal finished with a game-high 28 points and was one of just two players to end up in double figures. The other was Forest Hill’s Hailie Merritt, who led the Lady Patriots with 11 points.

The Lady Bulldogs dominated the Lady Patriots for much of the first half. The first quarter was one that Forest Hill would rather forget as it failed to score a single point and trailed Natchez High 16-0 at the end of the quarter. By the time halftime arrived, Natchez High had a commanding 31-8 lead.

Even though the Lady Patriots outscored the Lady Bulldogs in both the third and fourth quarter, the 23-point halftime deficit was too much to overcome.

NATCHEZ — The Natchez High School Bulldogs hung tough with Forest Hill High School in the first half, but the Patriots proved why they are one of the best teams in all of MHSAA Class 5A with a 71-43 win over the Bulldogs last Friday night to stay undefeated in Region 6-5A.

However, the third quarter proved to be pivotal as the Patriots’ defense held the Bulldogs to only four points in taking a 54-34 advantage. Forest Hill (10-1, 3-0) outscored Natchez High 17-9 in the fourth quarter.

Trevon Jackson led the Bulldogs (6-4, 2-1) with 18 points and Kameron Carter had 11 points. The Patriots were led by Jayne Mitchell with a game-high 23 points and Gemari Marshall poured in 19 points.

With time running out and the game tied at 30, ACCS missed a jumper, but Ford grabbed the rebound and was fouled, sending her to the line. After Ford gave the Lady Rebels the lead, Oak Forest’s desperation shot was no good.

“It was a hard-fought battle,” Lady Rebels head coach Melanie Hall said. “I was proud of my girls for how they responded. That was a great team victory. As I always say, ‘To God be the glory.’”

ACCS improved to 5-8 overall and 1-2 in district play. The Lady Rebels stepped out of district play and traveled to Franklinton, La. to take on Bowling Green School Tuesday night.

Cathedral lost 18-56 with Cate Drane leading the team with nine points. Cathedral will play against Brookhaven Academy on Tuesday night.