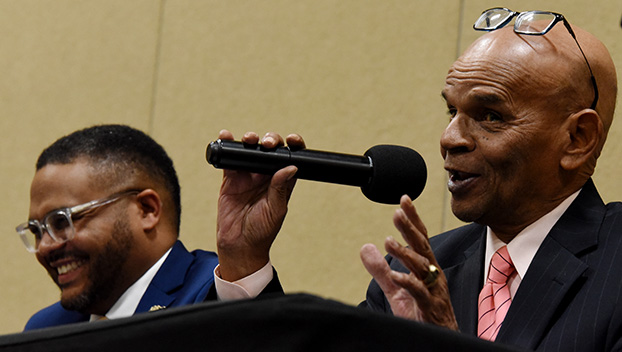 NATCHEZ — The Adams County Board of Supervisors moved to reappoint Phillip West to the Natchez Adams School District Board of Trustees after an ages-old discussion about the need for an elected school board.

Supervisor Angela Hutchins said the board received a letter asking for the Board of Supervisors to reappoint West to the school board.

A motion was made by Supervisor Ricky Gray and seconded by Supervisor Warren Gaines for the reappointment of West and passed by a vote of 3-2, with Supervisors Wes Middleton and Kevin Wilson both voting “nay.”

Middleton said since the county was in favor of electing school board members, could they start by holding an election each time a school board position came open.

Adams County Attorney Scott Slover said the Board of Supervisors could hold a non-binding referendum for the public to vote. However, without special legislation, the board would not be bound to appoint the person with the most votes, Slover said.

Slover said only the school board itself could move to become an elected school board without special legislation from the state.

“I feel like that would be a step in the right direction,” Middleton said of the referendum. “At that point, whoever feels like they’re the best one for that position can place themselves on that ballot. That’s what I think we need to do. That is what the people want.”

Supervisor Kevin Wilson said instead of reappointing West to the school board, he would rather interview applicants.

“This is an important decision,” Wilson said. “I’ve been beating this drum for five years about the fact that we need business people on the school board that understands the budget and — when presented something by the superintendent or whomever — they don’t just rubber stamp things.”

Middleton suggested placing the open position on the ballot in November.

“The people of this community want a voice on the school board and this gives them the option to have that voice,” he said.