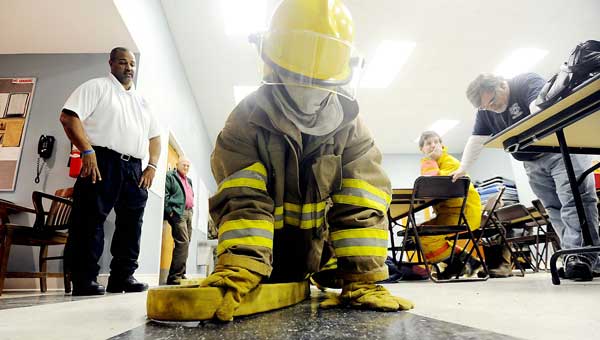 Adams County volunteer firefighters James Young and Maryanne Ray find their way out of a building using only the fire hose as a guide during a training in 2013, given by then-Mississippi Fire Academy adjunct instructor Darryl Smith, above left. (File/The Natchez Democrat)

NATCHEZ — Adams County officials inched closer to possibly having two new fire stations built in the county during the Adams County Board of Supervisors’ Tuesday meeting.

Supervisors voted unanimously to engage Benchmark Engineering & Surveying Co. to do a feasibility study on the project.

The board has long discussed the need for the fire stations to reach residents in the county who live too far off for a timely response from the City of Natchez Fire Department, which serves both Natchez and Adams County.

Adams County Fire Coordinator Darryl Smith said after the meeting Tuesday the study is the first step to determine the sites for the fire stations that would maximize the number of people who would benefit from the fire service.

Smith said Adams County has an agreement in which the county pays the City of Natchez more than $600,000 a year for fire protection, which expires in September 2023. He said much more discussion is likely between supervisors and city before moving forward with the project.

“It would be up to the supervisors and how they want to move forward with it,” Smith said.

Adams County Attorney Scott Slover said during the meeting the study would also help the board determine what the cost of building the new stations would be and identify funding sources.

“Part of the feasibility is finding out how are we going to pay for it,” Slover said to the board, adding the study would help them identify the cost and financing options.

Slover said it would not cost the county anything for Benchmark to do the study unless the board decides to move forward with the project.