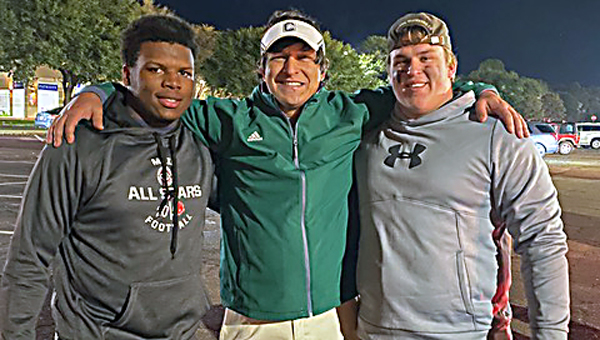 NATCHEZ — Vidalia native Jones Richardson played in the Blue and Grey All-American bowl on Monday in Dallas. Richardson represented Cathedral for the West team as an offensive lineman.

Richardson is six-foot and four-inches weighing 294 pounds and has started for more than three years as an offensive and defensive lineman. He first learned about the All-American game through Twitter where he was contacted by Blue-Grey football.

On game day, Richardson said he woke up early, and left the hotel on a bus for the stadium knowing he had a job to do. He said due to COVID-19 there could only be family in the stadium, which is different than having fans there in addition to family.

“It would have been really cool to have all of my friends with my family down on the field after the game,” Richardson said. “That is a once in a lifetime moment that we missed out, but we will be alright.”

Richardson is from Vidalia but goes across the river to Cathedra. He said the MAIS rules allow him to play football for Cathedral, and he has been going to school at Cathedral since Kindergarten.

In first grade, Richardson met his best friend Bryson Moore and they grew as friends through football. Moore is on the Cathedral football team and played as a running back and as a linebacker.

Cathedral head coach Chuck Darbonne said it has been a blessing to be able to coach Richardson for the past four years. Darbonne said he has been the coach at Cathedral for the last five years.

Richardson said he works out with Moore still, and a special moment he shares with Moore came in the MAIS All-Star game. Darbonne said he remembers the final play of the game.

“They finished the game with a sack together,” Darbonne said. “To secure the win for our team. I couldn’t see a better way for you to end your high school career, than to get a sack to finish the All-Star game with one of your best friends.”

His high school career may be over, but Richardson is looking to playing football at the college level. Darbonne said he thinks COVID hurt his recruitment, but Richardson has one offer on the table he sees as the leading choice right now.

The University of Louisiana-Lafayette offered Richardson a preferred walk on spot on the team. He said he has family in the Lafayette area, and he loves the area. With college on the horizon, Richardson said he has mixed feelings about the future.

“I’m looking forward to a new team, a new school, a new city, new coaches, new everything,” Richardson said. “But it is a little bitter sweet.”