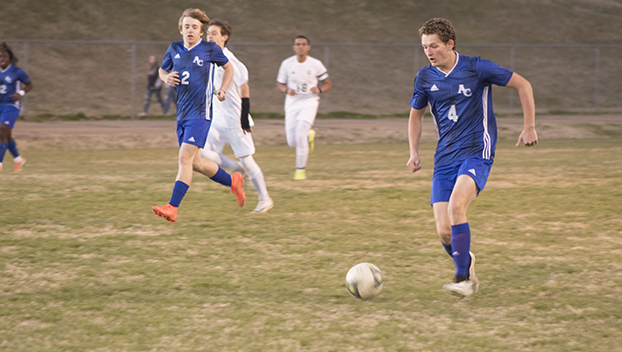 Tripp Cotten dribbles the ball down the field in a game against Cathedral last Monday. Cotten had two goals on Thursday against Central Hinds Academy. ACCS won 4-2.

RAYMOND — Tripp Cotten scored both of his goals in the second half as the Adams County Christian School Rebels picked up a much-needed win last Wednesday night as they defeated the Central Hinds Academy Cougars 4-2.

With ACCS playing goalkeeper-by-committee over the last month and a half, the Rebels needed to get going offensively, especially after a 1-0 home loss to MAIS Division II South and cross-town rival Cathedral High School last Monday night.

Brody Watts, one of three players head coach Jimmy Allgood has been having to play in goalkeeper in that span, came up big for ACCS with 14 saves.

Cathedral’s match against Oak Forrest Academy on Thursday night was canceled and will be played on Tuesday evening.