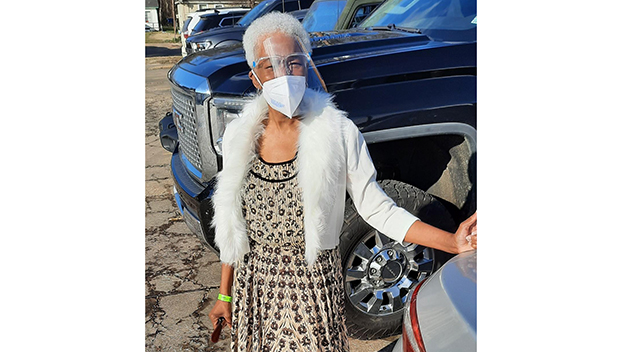 Carolyn Myers, of Natchez, is masked up before a day of filming in Greenwood, Mississippi. Myers plays a background actor in the upcoming ABC series “Women of the Movement.” (Submitted photo)

NATCHEZ — Carolyn Myers, founder of Seeds of Change Resource Foundation in Natchez, remembers being escorted by federal agents to school during the integration movement.

Fifty-five years later, at 68 years old, Myers is making her acting debut in an ABC television series about the movement she was part of so long ago, she said.

Myers said she remembers starting her first year of high school at John Rundle High School in Grenada, Mississippi, in 1966.

“It was sort of scary,” she said of the integration. “We were inside the school and there would be mobs of people outside trying to attack us. … The National Guard carried us to school every day to make sure that no one bothered us.”

Myers said it was her daughter, Ebony Conley, who prompted her to try for a part as a background actor in the upcoming television series on ABC called “Women of the Movement.”

“My daughter saw (the casting call) online and called me saying they were looking for someone in my age group, my size and my height and she said “Why don’t you apply?’” Myers said. “I applied on Tuesday morning and on Tuesday evening I got a call.”

The six-episode series written by Marissa Jo Cerar and directed by Gina Prince-Bythewood focuses on the story of Mamie Till-Mobley whose 14-year-old son was lynched in Mississippi in the 1950s.

“She (Till-Mobley) devoted her life seeking justice for her son, Emmett Till,” Myers said.

Myers said within a week of applying for the job, she was in Greenwood for her wardrobe fitting.

Most of the filming has taken place in Greenwood and Memphis, she said.

Though it is not a speaking role, Myers said she felt nervous at first.

After being told what she should do, the nerves slipped away and were replaced with excitement, Myers said.

In one of Myers’ scenes, Myers said she was handed a small brown bag of popcorn and walks along the street behind Emmett Till, played by Cedric Joe.

On her first day of filming Myers said she spent her entire afternoon on the set, from 2 p.m. until midnight. Myers said she expects to be back in Greenwood filming next week.

“They will be filming until the end of February and maybe into March,” she said.

Myers said she feels honored to have a small role in the series.

“I feel honored to have this opportunity,” she said.

With so much of her time dedicated to helping the homeless and veterans with Seeds of Change, “I wanted to venture out and do something for myself,” she said.