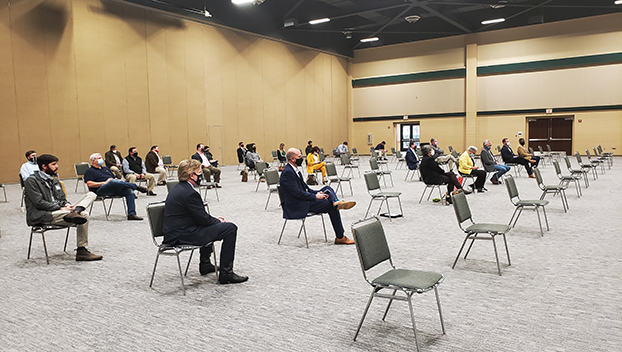 NATCHEZ — When given the opportunity to present requests to state legislators on Monday, Natchez and Adams County officials only listed two priorities for this session — with a later possibility of more requests should those projects become funded.

Natchez Inc. Executive Director Chandler Russ said both City of Natchez and Adams County officials weighed in on prioritizing the completion of the Bellwood Levee and the widening and resurfacing of Morgantown Road.

At least 50 Adams County citizens and officials attended the question-answer forum with Mississippi legislators Monday at the Natchez Convention Center with approximately half attending virtually.

Citizens and legislators had the option to attend via teleconference as a result of COVID-19 and many seized the opportunity, including District 97 House Rep. Sam Mims, R-McComb.

The forum was moved from the Natchez Grand Hotel to the convention center to allow ample room for social distancing, Natchez-Adams County Chamber of Commerce President Debbie Hudson said.

“In a weird way, we wound up with about the same number of people attending as we would normally have at the legislative breakfast at the Natchez Grand Hotel, which is usually about 60 people,” Hudson said of the half virtual and half in-person forum.

District 94 House Rep. Robert Johnson III, D-Natchez, was the only legislator to attend in person while District 37 Sen. Melanie Sojourner, R-Natchez, and District 96 House Rep. Angela Cockerham, D-Magnolia, were absent due to prior appointments.

Hudson said Sojourner notified her Saturday that she could not attend the forum because of a doctor’s appointment and Cockerham, who is an attorney, had to appear in court.

Russ said the Bellwood Levee project had been broken into multiple phases and contractors are getting to the final stage of closing the levee and finishing the drainage system.

In 2019, the state allocated $1 million towards the project, Russ said.

“(The levee) would allow that area to drain properly and really allow us to market that area to industrial prospects without having the stigma of flooding annually,” Russ said. “It is a tremendous piece of property that is, once it’s dry, probably one of the best sites on the Mississippi River.”

Russ said Morgantown Road is an “absolute nightmare” to drive at night and has been the scene of at least two fatal accidents. To widen and resurface the road is budgeted to cost approximately $3.4 million, Russ said, adding county officials have already done the preliminary legal work of obtaining rights-of-way from landowners.

Johnson said when officials make fewer, prioritized requests it is easier for the legislators to push for specific projects than when multiple projects are presented all at once.

Questions from the audience steered the discussion towards COVID-19 vaccines, funding for the state crime lab and education.

Mims said pushing the COVID-19 vaccinations out to the public is the state’s number one priority.

“Right now we are extremely focused on the COVID-19 vaccine,” he said, adding state health officials are “doing everything they can to roll out the vaccine as effectively and efficiently as possible.”

Some asked about the likelihood of special legislation being passed for Adams County to have an elected school board.

Johnson said Adams County residents were divided on whether the school board should be elected or not, however, he and other legislators are in favor of a uniform elected school board system for all of Mississippi’s public schools.

“It should happen, but I’m looking for Adams County to come together on that issue,” he said.

“I was pleased with all of the areas they were talking about,” Hudson said. “(The forum) went better than I thought it would. It’s hard when your directing questions from someone you can’t see.”