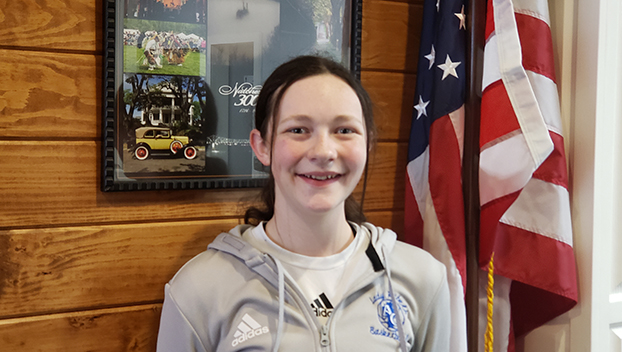 Lizzie Fife, an 8th-grade student at Adams County Christian School, placed first in a statewide Daughters of the American Revolution essay contest. She is the daughter of Rick and Amanda Fife.

March 5, 2020, marked the 250th anniversary of the Boston Massacre, considered to be a pivotal event that paved the way to the American Revolution.

Lizzie Fife and the other students of Maggie Allgood’s class at ACCS were told they could write an essay about the event for extra credit that would be entered into the DAR contest.

Students had to reimagine themselves living in Boston and, after witnessing the Boston Massacre, describe their family’s discussion of the event and what role it played in the American Revolution.

Fife, the daughter of Rick and Amanda Fife, said she imagined herself as a husband, father figure and newspaper reporter taking in the details of the Boston Massacre.

“I thought it was a good stance to get the story from a working person’s perspective,” Fife said. “Also as a father. Usually, women didn’t work in that time and stayed at home, so I thought a male would get a better look.”

Fife said she read books and old newspaper articles online about the massacre to fill her essay with the details and shape her fictional family’s perspective.

Fife said she was surprised and excited when she learned she won the contest.

“We were outside grilling hamburgers and my dad came outside to tell me I won. I almost burned the hamburgers because I was so excited,” she said.

“I love history … just because I think it is so interesting to see where you came from and also see how the world develops,” she said.

When she finishes school, Fife’s dream is to become a pediatrician because of her love for children and because “everyone needs a doctor in their life,” she said.

Fife said COVID-19 has reinforced her appreciation of those in the medical field.

“Our essential workers are having to work so much harder and I definitely appreciate them more,” she said.