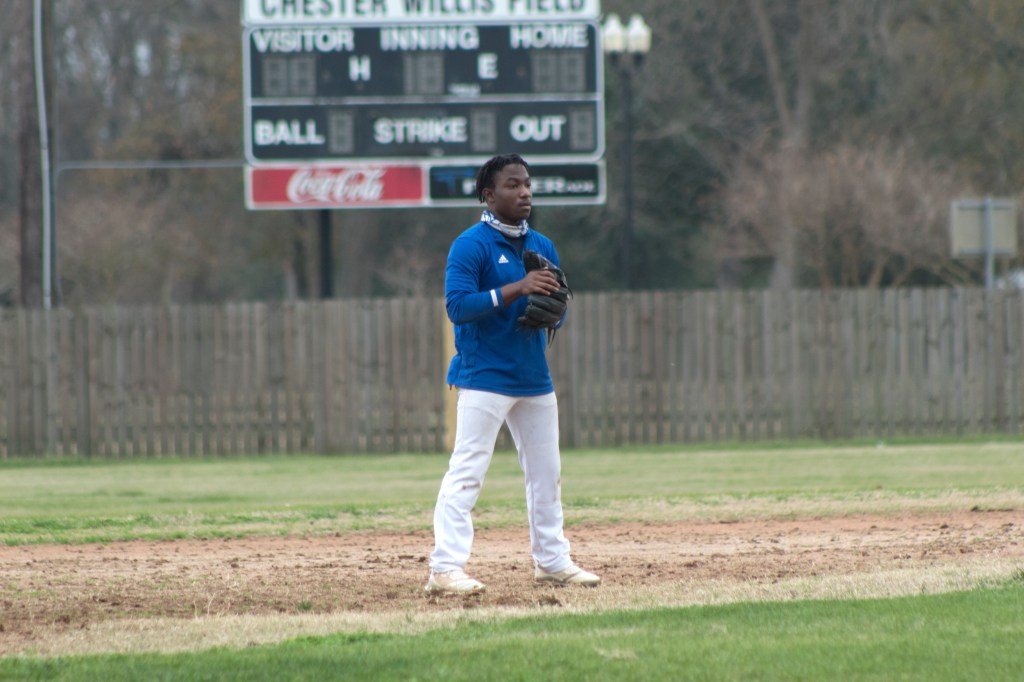 Jayllin Davis warms up at third base during infield drills on Monday afternoon. Davis is a freshman on the NHS team and is one of the young players head coach Dan Smith said he will depend on this year. Monday was the first practice of the 2021 season and the first time the team had taken the diamond together as a team since spring break of last year. (Hunter Cloud The Natchez Democrat)

The ringing of bats hitting baseballs and the smacking of gloves catching throws welcomed a new baseball season for Natchez High School on Monday afternoon.

Monday marked the first time since spring break that the Bulldogs had taken the diamond, and it was the first time Mississippi High School Activities Association schools across Mississippi could practice as a team. Head Coach Dan Smith said he missed the sounds of baseball season.

“It sounded good when we came out here and heard that ring, ring,” Smith said. “It sounds good, like music to my ears. The kids are excited too, and that is my enjoyment. To see how excited they are to come out here.”

He said his team has been playing together for a while, and all he and his assistant coach Kevin Campbell need to do is instill the mental side of baseball in the players.

Smith said baseball is a game played by nine key parts, and no one player is the star on the Bulldogs. He said young players like freshman infielder Jayllin Davis will be an important piece of the team.

Other crucial players will be junior catcher Roderick Simpson and senior pitcher Devin Winchester. Smith said Winchester would be his ace on the mound.

Smith said a benefit of 98 percent of his team playing football is they are kept in shape by head football coach Randy Craft. This conditioning will help he said when the COVID guidelines limit the number of players he could take with him to away games.

Natchez’s first game will be played on the road against McComb on Feb. 25. District play will not start until March, with a home and an away game being played against Forrest Hill, Jim Hill and Wingfield.

Last year Natchez got off to a strong start Simpson said before COVID brought the season to a halt. Smith said the goal for the team is to win district, but Simpson said the team could win more than just district this year.

“We are taking it all this year,” Simpson said. “To be honest I don’t see us losing to anybody on the schedule. We got a starting nine, we got guys coming up behind them, and we got the coaching staff. We got the team out here, but it depends on what we do on the field.”