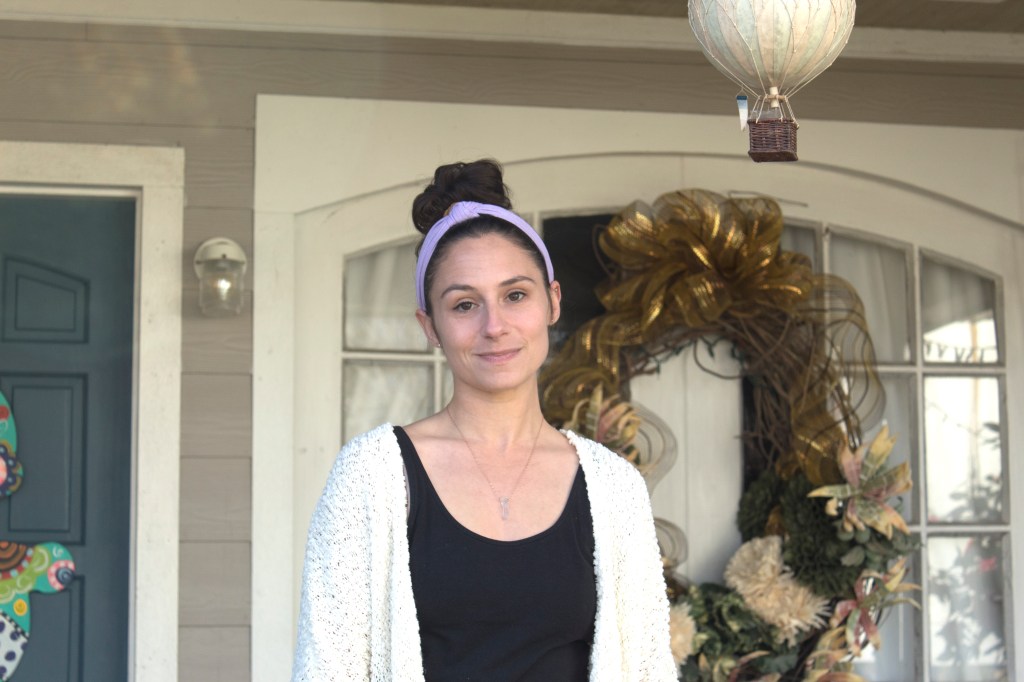 Callie Godfrey stands outside her home on Ratcliff Place where the dart landed Friday Morning. Godfrey is a doula, a stay at home mom and makes juice for people. She enjoys gardening and taking care of people. (Hunter Cloud The Natchez Democrat)

A garden for fresh grown produce, coolers for juice and a towering tree house decorated with arts and crafts can be seen on Ratcliff Place, close to where the dart landed Friday.

Callie Godfrey said she built most of the tree house with her husband during the March 2020. Inside the tree house is a dollhouse, and wood blocks her daughters Phoebe and Charlie painted from the tree house’s left over lumber. She said she wanted somewhere for her kids to play and to be independent.

“I lead them to be outside, and to take care of the earth,” Godfrey said. “I lead them into the direction I wish I would have been led to earlier in life. Instead of figuring it out after the fact.”

Godfrey homeschools her kids as a stay at home mom, and she said she makes her own soap. In her garden, she grows squash, elderberries, lemons, and tomatoes among other produce items. She makes juice with for others and leaves them in coolers on her porch.

This year was the first year Godfrey started selling her juice to the public, and even makes some for the Natchez Coffee Shop. She said she first started juicing after giving birth to Phoebe.

“Being a new mother pushed me into a new way of life,” Godfrey said. “I was reborn myself. I started looking at life differently, and I wanted to get healthier. “

Becoming a mother opened Godfrey’s eyes to a new way to live life. She said in order for her child to eat well, she had to eat well. Having a child was life changing, she said.

Being a mother also pushed Godfrey to want to help other women who are about to become moms themselves. Godfrey said she went into her first child not knowing what to do.

At the hospital, she said there was not really anybody there for emotional support. After giving birth to Charlie at a birth center, and experiencing the care of a doula Godfrey said she wanted to give the same care to others.

“I feel the need to help other people,” Godfrey said. “I’m an emotionally, caring person.”

In addition to being a doula, she also set up three free libraries around town. One is at Duncan Park, the other outside of Rolling “N” The Dough and the third is outside her aunt’s Dianne’s Frame Shop.