Studio owners teaming up to make Natchez a music-making destination 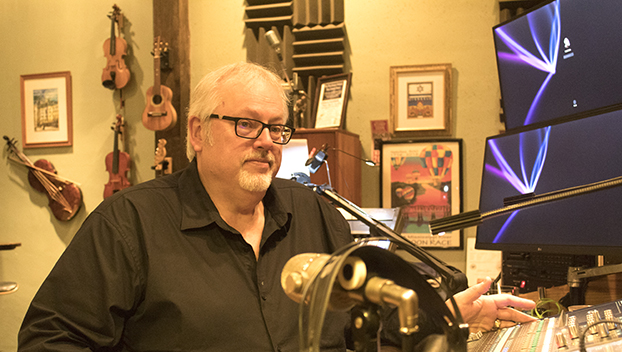 Ron Roper is the owner of MediaGate in Natchez and is pictured above at his studio. (Hunter Cloud The Natchez Democrat)

A year and a half ago, Burne Sharp and Ron Roper met for coffee, where they discussed Sharp’s vision for the future of the music industry in Natchez.

This vision was for three music studio companies to collaborate, and work together out of two locations. Now Sharp’s Natchez Sound Studio, Roper’s MediaGate studio, and Kejuan Hawkins of Promount Music have joined together to make Natchez the place to record music, Roper said.

“We want to be like Nashville or Muscle Shoals, but have it here,” Roper said. “We can’t do that by ourselves. If you get us together, things begin to happen. It is about making Natchez the place known for recording, editing, mastering and all the media art.”

Sharp is a Natchez native, and he played the drums for Bishop Gunn, a Natchez-based band. He also specializes in analog recording at his Natchez Sound Studio.

Roper said he is from all over the United States, as his family traveled with church revivals, but he has been in Natchez for the past 20 years. His studio is located in an old racquetball building, and he specializes in digital recording.

Hawkins is a native of Natchez who has a passion for music. Hawkins is the youngest of the group, and he said he is mostly self-taught, but he specializes in production, owns Promount Music, and he also has film work experience.

Together their goal is to make Natchez a place for artists of all genres to record music, Roper said.

Hawkins said the group wants to provide high quality services to musicians, but also keep rates affordable, especially for natives of Natchez. Musicians will have access to digital and analog recording between both Natchez Sound Studios and MediaGate, and the combined skills of Sharp, Roper and Hawkins.

In the studio, before any tracks are recorded the group will work with the artist to have an understanding of what they are trying to accomplish. Roper said the collaboration is more than just recording music on a laptop, but utilizing all the other skills the group has to offer in producing music.

One of the hopes Sharp has is for Natchez to harness the energy of the Mississippi River and turn it into beautiful music. He said he believes cities like Memphis, Nashville, Muscle Shoals, New York City and Detroit, where he said hit songs are made, harness the energy, because they all share a trait of having a river in close proximity.

While Nashville’s sound is country music, and Muscle Shoals’s sound is rock-and-roll. Hawkins said the Natchez sound is traditional gospel and the blues. In collaborating, they are not trying to limit themselves with one sound he said, instead they are trying to create a space where all genres are welcomed.

“We are trying to make it a conglomerate of different genres,” Hawkins said. “You have so many types of styles and you want to be able to accommodate those people. We don’t want anybody to feel like they can’t get done what they want to get done.”

On Tuesday, Natchez Mayor Dan Gibson announced that Broadway Street would be the location of an entertainment district. Roper said he thinks Natchez has the potential to become an entertainment industry hub, but it will need resources from outsiders to do so.

Hawkins said they have the tools with the collaboration to make Natchez the place for music, they have the relationships, and the close bond of trust, Roper said. They all each have a key to each of the studios. Sharp said it makes no sense for the studios to compete when they could work together to build something great.

“Unity, community, and just good music,” Sharp said. “I think we can create good music that builds community, but also lends a hand to that community having more unity. I think we are going to accomplish something that has the potential to be bigger than just a couple of folks.”