Rebels early pair of goals too much for Green Wave 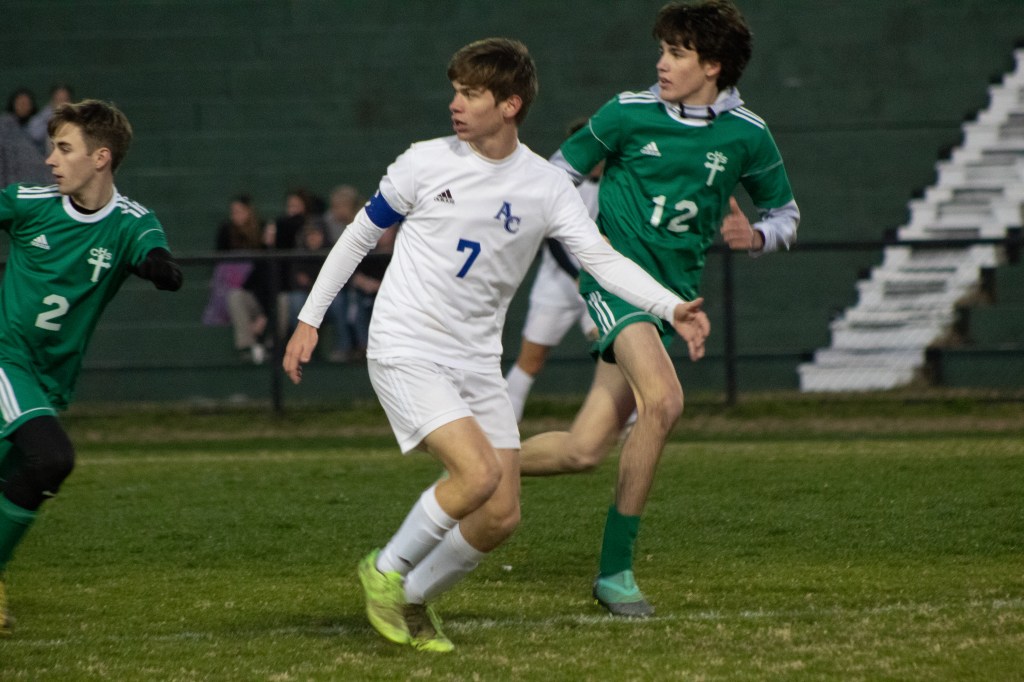 Nolan Owens runs alongside Paxton Junkin who was defending him. Owens got the second goal in Adams County Christian's 2-1 win over Cathedral Monday night. (Hunter Cloud The Natchez Democrat)

Two quick goals by Tripp Cotten and Nolan Owens in the first half pushed the Adams County Christian Rebels to a 2-1 win over Cathedral Monday night.

Cotten scored when a ball was lose in the box and fell to his feet. He quickly dispatched the ball past the outstretched arms of the keeper diving to his left to make it 1-0.

Just five minutes later, Owens scored on a counter attacking goal as he sprinted past a defender and got onto the ball. Owens then calmly slipped the ball past the keeper and wheeled away in celebration with a 2-0 lead.

Cathedral’s head coach Dennis Hogue said ACCS cane into the game in sprint mode. It took ten minutes for his team to catch up, he said, and it was the difference in the game. At halftime the team was trying to get pumped up to mount a comeback.

“It’s both a burden and an inspiration too,” Hogue said. “These guys in the locker room were like ‘2-0 is nothing. They got their two goals in 5 minutes, we can do the same thing,’ it’s a hundred percent we need to get this back and work extra hard.”

Hogue said when a team is behind they sometimes work too fast and have more mistakes.  He said they are not as clean cut and crisp with their attacking play.

Officiating in the match was questioned by both coaches. Fouls not being called by the refs  led to a boiling point in the match, Hogue said.

The game’s boiling poly came late in the second half a penalty kick was awarded to Cathedral for a handball. An ACCS assistant coach came down the touch line and questioned the refs call in the box. The coach was given a red card for dissent and sent off the pitch.

Hogue said as a referee he would not have called it a handball, but as a coach he wanted the penalty kick. Also as a referee he understood how an angle may change how you see a play.

“I try to give refs the benefit of the doubt,” Hogue said. “When you are running on the field and you are trying to catch up to the right angle it is really hard to get it all right. I think he had a bad angle.”

Zach Mann stepped up to the penalty spot and fired the ball past the keeper to make it a Rebels 2-1 lead over the Green Wave. Mann’s goal will be crucial to the playoff picture, because it means the Cathedral and ACCS playoff race comes down to their remaining match against Oak Forest.

Cathedral won the first game against ACCS 1-0, and both teams lost their first game to Oak Forest by a two goal deficit. Hogue said they are back at square one, and they will play Oak Forest sometime this week. The match had been rescheduled due to rain.

“We got our work cut out for us,” Hogue said “We know if we go in there just fighting for the win then it won’t be enough. We got to get as much as we can to make their job harder. It is all about the attack now, no point in protecting a losing record.”