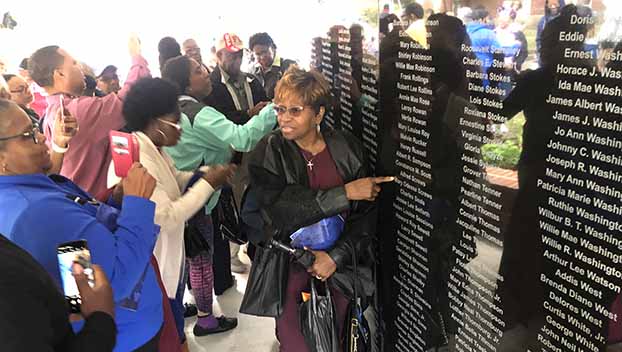 People surround the Proud to Take a Stand monument at a dedication in 2019. (File photo / The Natchez Democrat)

NATCHEZ — The City of Natchez is celebrating Black History Month by revisiting a piece of Civil Rights history in Natchez.

The Proud to Take a Stand Monument Committee is reconvening this month to add names to the list of those who were wrongfully incarcerated for a Civil Rights demonstration in October 1965. The deadline for new names to be submitted is March 1.

Hundreds of people were arrested for violating a city parade ordinance that was later ruled unconstitutional and many were held at the state penitentiary at Parchman because city and county jails were full.

A granite monument, 6-feet tall and 12-feet long and engraved with the names of 486 people who were unjustly imprisoned in this historic event, was completed in October 2019 at Canal and Jefferson streets.

However, Alderwoman Felicia Irving said members of her own family were left off of the monument. Irving said some of her constituents also pointed out names that should have been included on the monument and were not.

Officials set aside approximately $5,000 to add any names that were left off by making small improvements at the monument site.

“We are so grateful for the work put in by Mr. Robert Purnell and the Proud to Take a Stand Committee,” Natchez Mayor Dan Gibson said. “This is such an important monument, and we want to make sure that everyone involved in this terrible incident is properly recognized. The city has also set aside funds for light improvements (around the monument) and we look forward to taking the next steps.”

City community liaison Jessica Hawkins said anyone who was arrested or knows someone who was arrested during the Civil Rights demonstration on Oct. 2 through 5, 1965, should submit the names to the mayor’s office at Natchez City Hall by March 1, along with all documents supporting their request.

These documents can be emailed to jhawkins@natchez.ms.us.