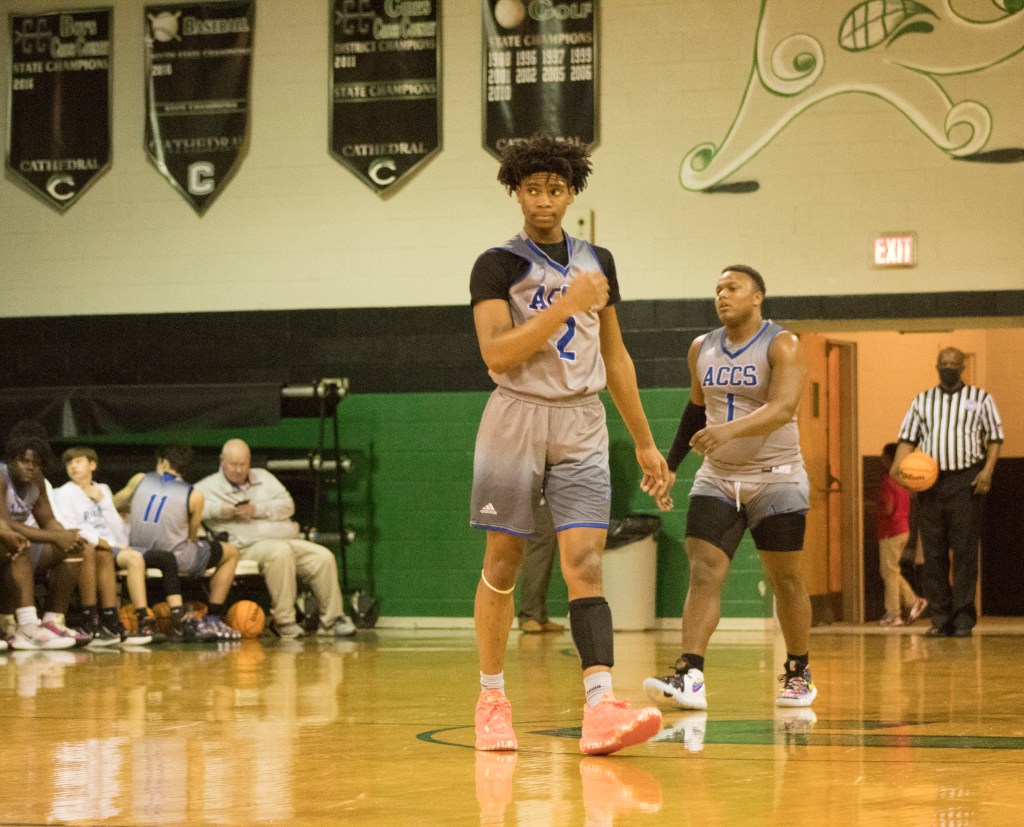 Tigi Griffin walks across the court at a district game against Cathedral earlier in the year. (Hunter Cloud The Natchez Democrat)

In the varsity boys’ game, seniors Josh Credit and JD Granger led ACCS with 17 and 10 points, respectively, as the Rebels held on for a hard-fought 40-39 win over the Oak Forest Academy Yellow Jackets.

“It was a good environment for Senior Night. My seniors, Josh Credit and JD Granger, both played,” Rebels head coach Matthew Freeman said. “Josh was our leading scorer.”

Freeman said the outcome of the game came down to two things — offensive execution and defensive tenacity. The game was played at anything but a fast pace by ACCS and Oak Forest.

“Both teams tried to slow the game down and take care of the ball,” Freeman said. “I’m proud of how we took better care of the ball than we did the first time we played them. We made a few more lay-ups. We held on at the end and got the win. They made it close at the end.”

With the win, ACCS (no overall record given) finished in third place in District 4-4A with a 4-4 record. Freeman said the Rebels will most likely take on host school Simpson Academy, depending on where it finishes in District 3-4A, in the first round of the 2021 MAIS Class 4A South State Tournament. That tournament takes place on Feb. 9, 10, 12 and 13.

No other information on the game was available. The win was the second in a row in as many nights for the Lady Rebels, who improved to 7-13 overall and 2-5 in district play. They play at Cathedral High School in a make-up game Friday at 5 p.m.

Even though WCCA is three classifications lower than ACCS, one wouldn’t have known with the way the Rams played in the first half. The Rebels held a 14-13 lead at the end of the first quarter before the Rams outscored them 15-11 in the second quarter for a 28-25 halftime lead.

But ACCS turned to its defense in the third quarter to turn the momentum back in the home team’s favor. The Rebels put up 16 points while holding the Rams to just 10 points for a 41-38 advantage. WCCA tried its best to pull off the upset in the fourth quarter, but ACCS made sure that would not happen as the Rebels outscored the Rams 20-18.