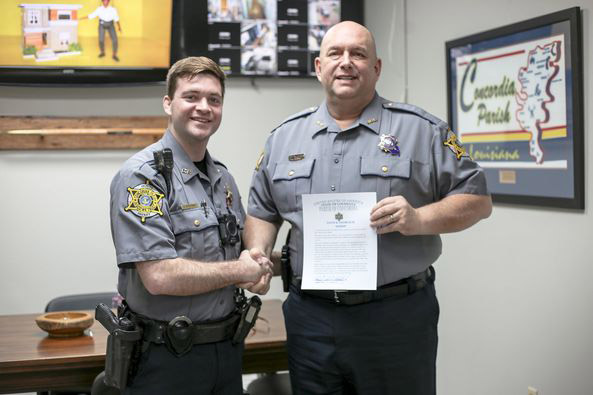 Hedrick made a social media post on Thursday that acknowledges deputy Justin Stevens for subduing a suspect who was armed with an 8-inch knife.

“The suspect had been attempting to cut several family members with a knife and had been physically abusing them in the past,” Hedrick said in his post, adding, “The complainant stated that if Deputy Stevens had not arrived when he did that the suspect would have killed them.”

Hedrick later identified the suspect as Jackie J. Cornwell, 50, and said Cornwell was at a trailer park residence just outside of Ferriday where he threatened multiple people on Wednesday.

Hedrick said the victims had been “roughed up” but none were stabbed or seriously injured.

Hedrick said Cornwell was close to harming one person when Stevens arrived and maneuvered him to the ground. Cornwell also attempted to take Stevens’ gun but was unsuccessful, Hedrick said, adding Stevens is highly skilled in jiu-jitsu — a form of martial arts — which helped him subdue Cornwell.

Hedrick attributed the success Stevens had in preventing Cornwell from doing further harm to Stevens’ training, his clear head and to God for his protection of everyone involved.

In his post, Hedrick commended Stevens for using only the amount of force necessary to effect the arrest.

“Deputy Stevens was faced with an unimaginable task to arrest this violent suspect,” Hedrick said. “Being well justified to use deadly force, he only used enough force to effect the arrest. We commended him for this and have never been more proud of his actions as a deputy. God bless and job well done.”

Great leadership from those who moved I-14 forward