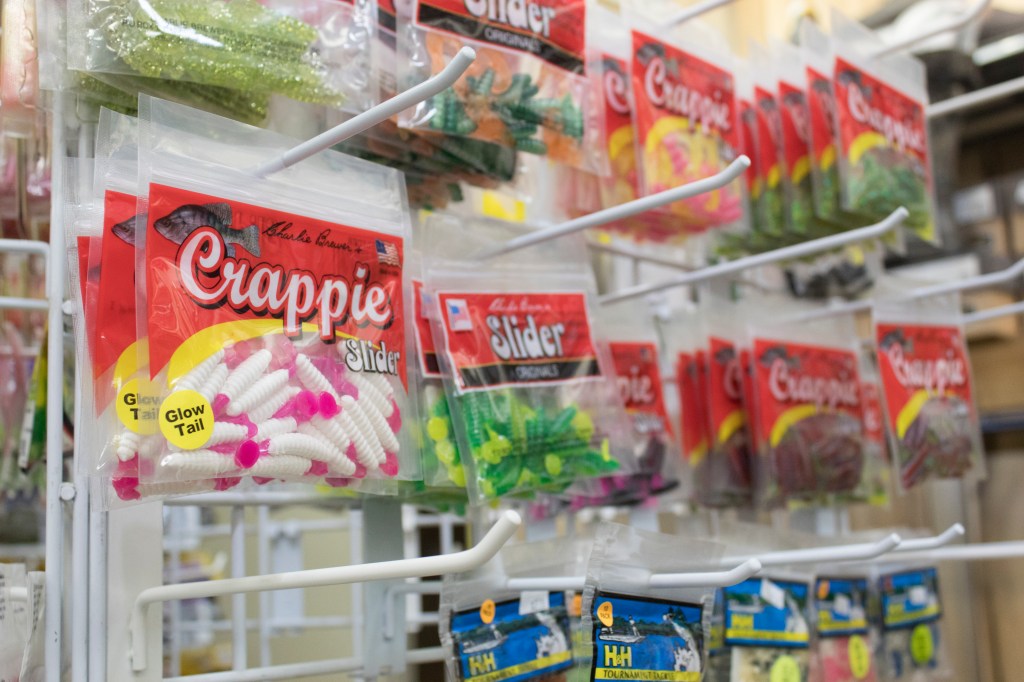 A selection of crappie lures on display at Sports Center in Natchez on Friday. Lance Beasley said he likes to use Cajun Crickets and jigs if he is using artificial lures to fish for Crappie. If he uses live bait he likes to use minnows and shiners. (Hunter Cloud The Natchez Democrat)

Fishermen hit the waters in February and March in search of crappie as the water begins to warm up, because Natchez resident and crappie fisherman Lance Beasley said it is thought to be the peak time to fish crappie.

He said the idea of a rigid crappie season is something he used to believe in, but through his experience it is not a rigid set of dates. Beasley said crappie fishing depends heavily on water temperatures.

“You can pretty much fish them all year round,” Beasley said. “Winter time is my favorite time to crappie fish. They are deep, schooled up and easy to catch if you can find them.”

Crappie will begin leaving the deeper part of lakes in February as the water temperatures warm up and they move to shallow water. Beasley said water temperatures have to be consistently in the 50’s and 60’s for crappie to move out of the deep water.

He said when the water is cold Crappie like to stack up in the deepest parts of the lake because that is where the warmer water is. As the water warms up crappie, move to shallow flats for spawn.

Shiners and minnows are effective live baits Beasley said, but he also likes to use Cajun Crickets and other jigs especially during the time Crappie begin to spawn.  He said his go to rod is a 16-foot trolling rod, or a 10-foot jig pole.

In the winter months, Beasley said he prefers to fish using a spider rig method. Spider rigging is taking multiple poles in a boat and having lines spread out like the legs of a spider, Beasley said it helps to use a longer fishing pole.

“I like to fish 10-foot poles, in my opinion the longer the pole you spook the fish less,” Beasley said. “Your pole is further away from your trolling motor on the boat. During the winter time the bite is kind of lethargic.”

There is an ample amount of lakes in Adams County and Concordia parish for anglers to fish for crappie, Beasley said. One of his favorite things about the area is all of the options he has. He said when he gets tired of one lake he moves on to the next.

“I enjoy being in the boat and out on the water,” Beasley said. “I also enjoy trying to outsmart the fish. Some days you may be all over the fish, and they just won’t bite. It is about finding the fish, and staying on them.”