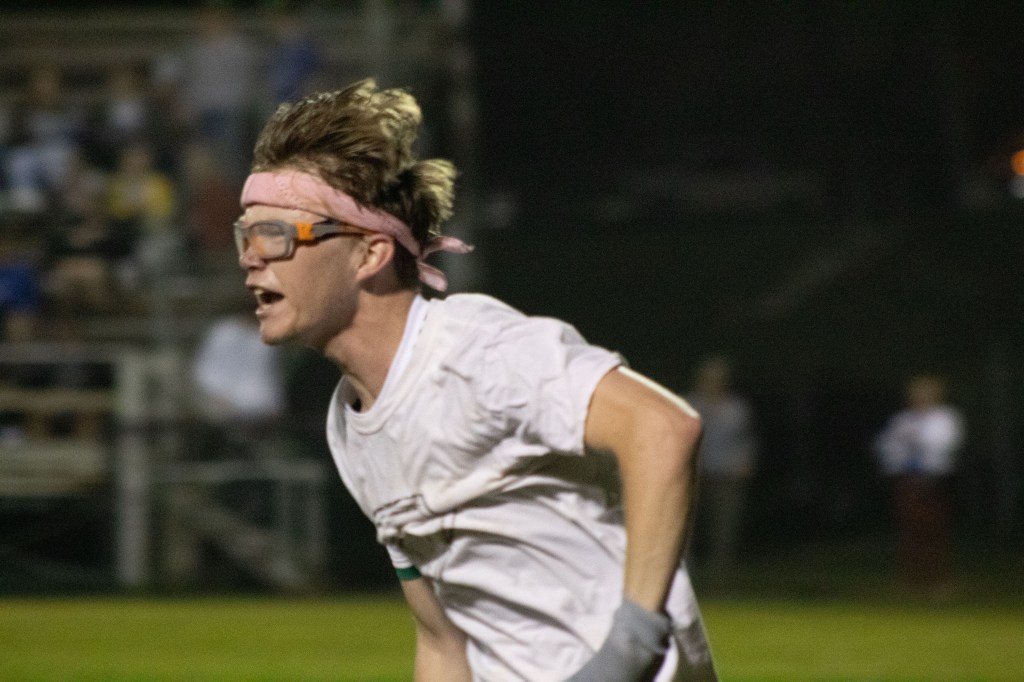 Cathedral goalkeeper Joseph Garrity celebrates his team's 2-1 win over ACCS to go to the first round of the playoffs last season. The senior's final home game will be against ACCS and will be the end of 19 consecutive years of family legacy. (Hunter Cloud The Natchez Democrat)

A referee blows his whistle and sticks his arm out and points to the penalty spot. He spotted a handball in the box with 9 minutes left in the game. Cathedral and ACCS are tied up at one goal in a play in game for the playoffs.

Cathedral’s Kennedy Williams takes the ball and says a prayer before taking the penalty kick. Williams swings his foot through the ball sending it to the lower left corner and just past the outstretched hands of goalkeeper Brody Watts.  The penalty was the deciding goal in a 2-1 victory for Cathedral.

“I said ‘God I just pray to you. Whether I score, or whether I miss, that you will just bless me to keep going forward.’,” Kennedy said. “I have stepped up to the spot plenty of times. I know the first few times I stepped up it was mind boggling. After practicing, and repetition, it just became second nature.”

Williams said he knows exactly where he is putting the ball before he steps up, and he takes a penalty shot. His approach to taking a penalty is hard  and low, a technique he said he learned from Cathedral’s head coach Dennis Hogue.

“That has always been a dream of mine, even if we do not get to state, just to bring this team to the playoffs, “ Williams said. “After years and years of losing and going down it has just been more motivation. Just to have God manifest that, and to have it happen right in front of my eyes. When the final whistle blew there was just an awe feeling, I couldn’t comprehend it.”

ACCS started off the game with the first goal of the night as Nolan Owens got free in the box and fired a missile into the Cathedral goal to open up the scoring with 24 minutes left in the first half.

Cathedral generated some chances but did not finish any shots in the first half before halftime. The Green Wave came out firing in the second half scoring a goal nine minutes after halftime. A miscommunication in the box, and a string of shots and bodies flying to block shots led to Grayson Guedon firing the ball home.

Over the next 20 minutes the tension continued to build in the stands and on the sidelines. After Williams scored his penalty kick ACCS started to throw balls and attackers forward. Over the next five minutes the Rebels tried to create a last gasp equalizer.

They had a few chances including two free kicks about 30 to 40 yards from goal but failed to place a shot on target from those chances. Willliams said when the final whistle blew both teams left everything on the field even after all of their yelling and physical play.

“At the end of the day we left on the field, both teams,” Williams said. “I’m thankful to God for the chance to play them, because they are a very very talented team. I have no sort of animosity towards them.”

Cathedral advanced to the first round of the playoffs with their win in the play in game and will play against Hartfield Academy at a date which is to be determined.