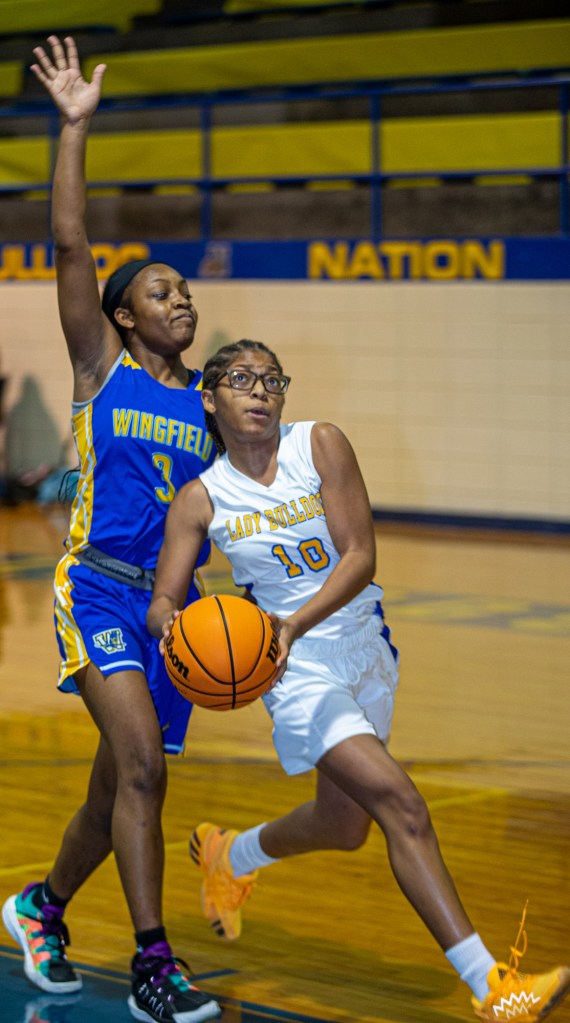 Natchez High's Jakeria Carter battles Wingfield's Makayla Crowley for two points. Carter led the Lady Bulldogs with eleven points for a 44-14 win over Wingfield in the first game of the Region 6-5A tournament. (Bill Barksdale special to The Natchez Democrat)

Special for The Natchez Democrat

Everything was in place for the first game of the Region 6-5A tournament at Natchez High School.  Teams, refs, scorekeepers, and a video crew were all present.  Before Tuesday night would end, the Lady Bulldogs (#1 seed) would defeat Wingfield High School (#4 seed) 44-14.

But glaringly absent from these games at NHS were no fans in the stands. No parents or students present, not even cheerleaders.  The medical trainer doubles as the announcer, who doesn’t have to promote the concession stand.  Extra custodial staff descend at half time to disinfect the players’ chairs. The game ball is frequently swapped out and cleaned.

Basketball in a time of pandemic is different.

Senior Lady Bulldog Kyla Butler says the absent crowd is not good at all.  She hates that so many people can’t be there to watch them win.  “But if I’m honest, I think our focus is better,” she admits.

Butler is proud of the team’s accomplishments, especially going undefeated (6-0) in district games. “Coach Moore has taught us to communicate better, to talk up the game on the court,” Butler said. “Personally, she is always pushing me to be more aggressive and reminding me that I can do anything I put my mind to.”

Meanwhile, the players on the bench take up the cheerleading and encouragement: “D-up, D-up!” they yell after wildly applauding the previous basket.

An absent crowd did not slow down Natchez High’s Jakeria Carter from attacking the basket for a team high of 11 points against Wingfield.  The Lady Bulldogs dominated from the first basket allowing Athletic Director and Head Coach Alphaka Moore to give some of the younger girls playing time.

“This was a great night for our bench,” Moore said.  “I know we will need them down the stretch in the playoffs and tonight built a lot of confidence in some of our freshman and sophomores.”

The most Wingfield could challenge Natchez was with their tallest post player, senior Makayla Johnson.  Johnson had more than a dozen blocks of Bulldog shots in the lane. “She’s been doing that all year for us, a very dedicated player,” said Wingfield Head Coach Ira Peterson.

Nyla Poole and Kelsey McNeal stood out as the leading two defenders in Moore’s 2-3 defense scheme.  With physicality and energy, they limited Wingfield’s baskets to 14 and caused multiple turnovers.