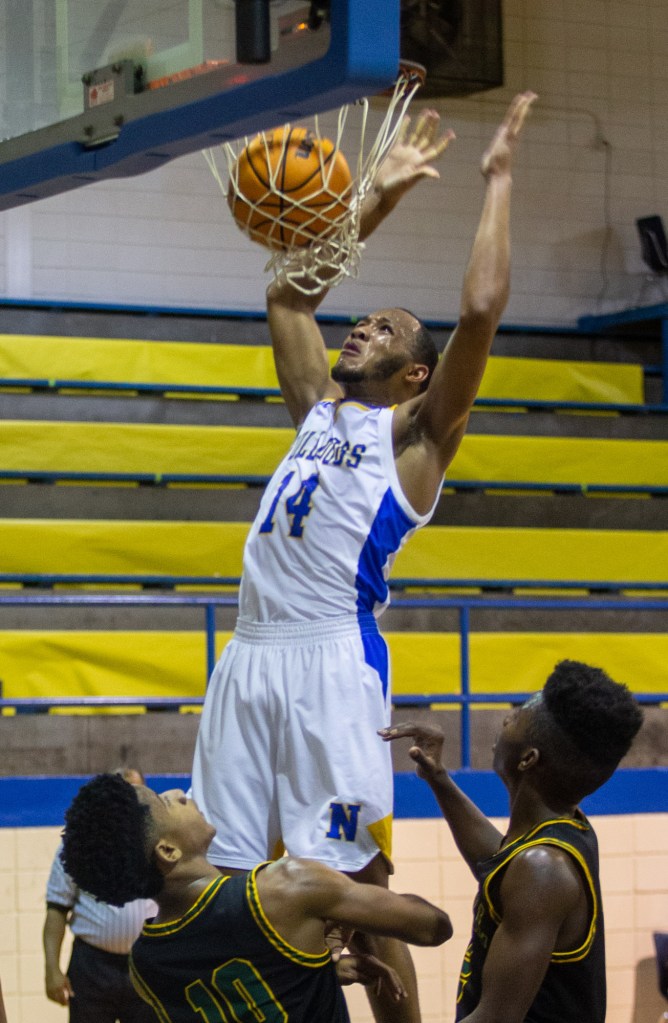 Natchez High's Trevon Jackson finishes a dunk and racked up 12 points on the night in the first game of the Region 6-5A tournament. (Bill Barksdale for The Natchez Democrat)

Special for The Natchez Democrat

Natchez High School won its first game of the district tournament as the Bulldogs defeated Jim Hill 54-45 on Tuesday night. Bulldog’s senior Cam’ron Bailey feels this year’s Natchez Varsity boys team could go all the way to the championship game.

“We made a good run last year, which gave us some experience.  Coach has high expectations of all of us and we intend to meet them,” Bailey said. “Coach Haywood has taught us defense above everything.  Of course we must shoot and sink baskets but getting right back on defense is critical to getting the win.”

Head coach David Haywood’s strategy of full court defensive press paid off against Jim Hill. Travis Berry and Cameron Carter led the Bulldog offense with 15 points each followed closely by Trevon Jackson with 12. He was thrilled with the Bulldog’s performance in their first game in the tournament.

“I was pleased with how hard the guys played tonight and how intent they were on winning,” Haywood said. “We had some fatigue issues down the stretch and a few mental mistakes, but they played extremely well on the defensive end of the ball.”

“Tonight is the first time since 2002 that the boys have won the first game in the district tournament, so I’m very proud,” Haywood said.

The Bulldogs were aggressive from tip off through the last quarter of play.  In spite of their physicality, no player was in foul trouble throughout the night.

They showed discipline in passing the ball to the player most likely to make the goal.

“I preach to them all the time to pass it to someone else to let them score a goal when it seems right, then they will have a chance to do that for you,” Haywood said.

The championship games of this Region 6-5A tournament will be at Natchez High School on Friday Feb. 12 starting at 6pm. Both NHS girls and boys teams will play against Forest Hill High School.  The winners will go into 5A playoffs as the #1 seed.