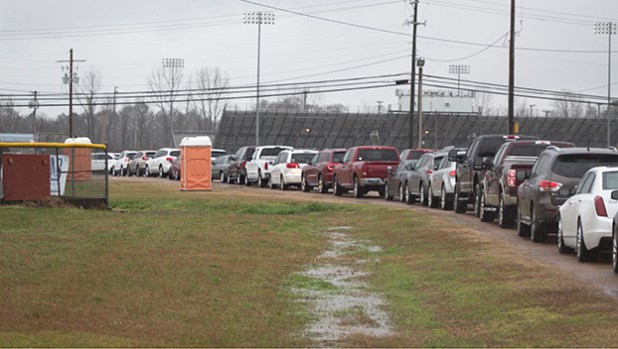 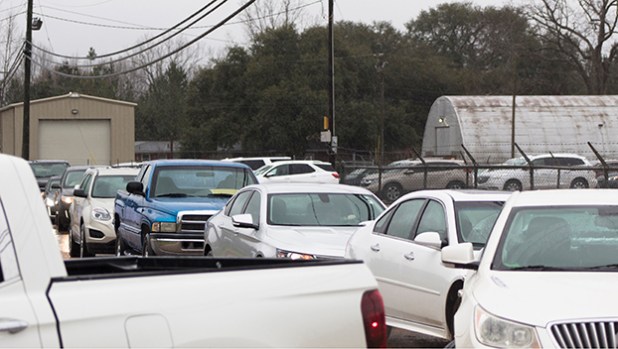 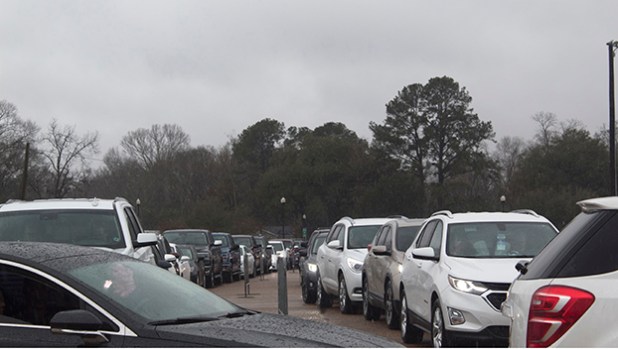 Cars lineup behind the baseball field where Natchez High School plays as they wait for their COVID vaccine Thursday morning. Liberty Road was backed up to the overpass at one point. (Hunter Cloud The Natchez Democrat)

NATCHEZ — Lines of cars three lanes wide filled the road behind the outfield wall where Natchez High School plays baseball as people waited to receive the COVID-19 vaccine at the Adams County Safe Room on Thursday.

Adams County Emergency Management Director Robert Bradford said the drive-thru vaccinations were delayed because of the weather and lighting.

Rain pounded on the roofs of the cars throughout the morning and afternoon.

Health workers and patients could not be out in the storm to administer and receive shots under those conditions, Bradford said.

“Due to the weather, they had to wait to keep people safe,” Bradford said.

Mary Eidt said she drove through the line only to be told twice to leave and come back. The line was at a complete standstill for at least an hour and did not budge until just after noon on Thursday.

The length of the line also impacted traffic on Liberty Road.

Natchez Police officers were out in the road blocking off turn lanes and directing vehicles to keep the traffic moving.

At one point, traffic was completely stopped from the Exon on North Shields Lane and Liberty Road, to where people turned to enter the road leading to the safe room.

Bradford said drivers that were parked on Liberty Road were told to keep driving and come back so they would not block traffic.

“They were not turning people away,” Bradford said, adding some parked on the road were told to come back to keep the traffic flowing.

Bradford said the line continued to move slowly at approximately 1 p.m. Thursday as those with vaccine appointments continued to receive shots.

“They will stay open for as long as they can (to give the shots),” Bradford said.

“We ask that you please be patient with us. We have a lot of traffic on Liberty Road due to the fact that some people trying to receive the COVID-19 vaccine and the weather being bad. We want everyone to be mindful,” Daughtry said, adding he is grateful to those working under poor weather conditions.