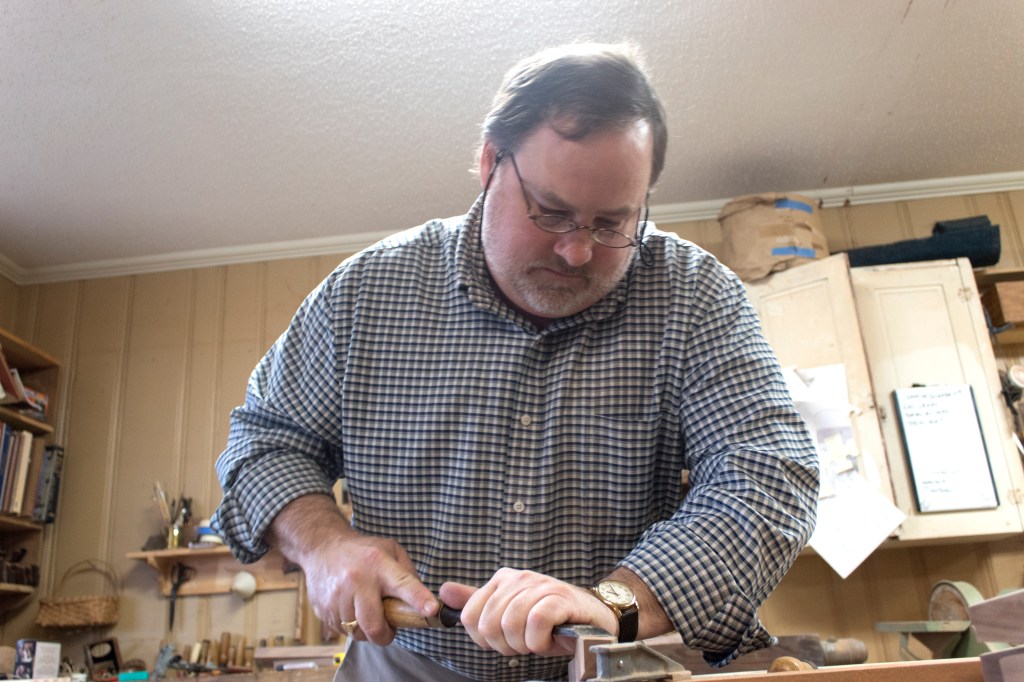 Adam Gwin uses a file on a leg of the chair he is building. The chair is being modeled off of an antique chair he said. Gwin has owned his own furniture building company for the past 12 years. (Hunter Cloud The Natchez Democrat)

Adam Gwin works on the pieces to a new chair in his Adam Gwin Fine Furniture shop near the intersection of Martin Luther King Jr. and Main streets, close to where The Dart landed Wednesday afternoon.

Gwin is a lifelong resident of Natchez, and he graduated from Trinity Episcopal Day School. He started college at Ole Miss and transferred to LSU for reasons he said were too complicated for The Dart.

Gwin earned a double major in history and English minored in speech because he hoped to become a lawyer, but later changed his mind.

“I come from a family of lawyers, so that was the most logical thing to do,” Gwin said. “I decided that was not right for me. I have always been good with my hands.”

For a couple of years, Gwin worked at The Natchez Democrat in advertising before he decided to open his own furniture store about 12 years ago. He said his first experience in furniture building began early in his childhood.

He was 10 years old when his dad wanted to build a piece of furniture, but Gwin said his dad did not believe he had the tools to do it. He set out to prove his dad wrong because he said where there is a will there is a way.

Gwin drew up plans to use tools they did have to still make the piece of furniture possible, and they were able to build it.

“I have always understood how things go together,” Gwin said. “I’m still learning. I have been doing this for about 12 years now. If I’m still doing it 12 years from now I will still be learning.”

Projects can take up to 500 hours of work to complete. At one time, Gwin said he is working on seven to eight projects. When one stumps him, he moves on to the next one for a little while.

Gwin said he found a craft he could enjoy through furniture building. The constant problem solving and piecing together parts of a puzzle are some of the joys of the job, he said. Restoring old furniture is also fun for Gwin, because he said he is almost like an archeologist.

“In taking a piece of furniture apart you can really begin to see the life it has had,” Gwin said. “By restoring it you are able to give it more life. I enjoy both aspects (restoration and building). I have never built two things that were exactly alike. Everything I build is different. Every piece of furniture I restore is individual. Everything is one of a kind.”