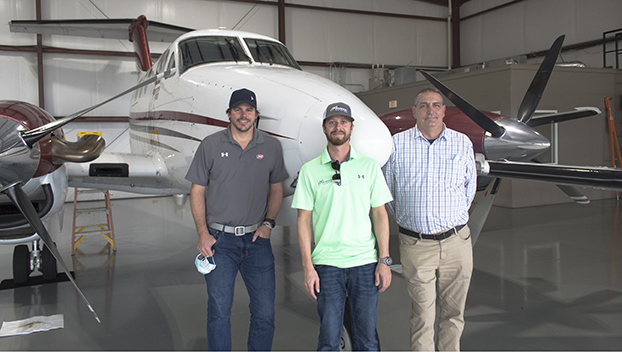 From left, Tate Hobdy, Aaron Maroon and Richard Nelson stand in front of a plane stored in a hangar at the Natchez-Adams County airport. The airport will host a fly in on March 20.

Pilots, their planes, and the public are invited to join the Natchez-Adams County Airport for the Natchez Fly In on March 20.

The fly in will feature food, music, and representatives from Cessna, AirEvac, Citizen Aviation Patrol and Dispatch Aviation.

Airport Director Richard Nelson said after seeing the success the airport had with a short notice fly in held in November 2020, he, along with Tate Hobdy and flight instructor and pilot Aaron Maroon decided to hold a full fledge fly in this spring.

He said the fly in is a community awareness tool that airports use to get the community more involved. Tate Hobdy said it is also important because a lot of people in Adams County do not know the airport exists.

“Even if it just makes people aware that we have this resource in Natchez. It is probably worth it,” Hobdy said. “Kids, and adults, can come out and look at airplanes.”

There is no cost to those planning to attend the fly in, and pilots are asked to register online, but they will not have to pay a fee for attending. If pilots buy gas the day of the fly in there will be a discount, Hobdy said, and already 35 pilots have signed up for the fly in.

Nelson said the airport is a diamond in the rough because of how big the two runways are. He said everything a pilot would need is on one end of the runway. Nelson said showing hospitality to pilots is one of the ways the airport tries to get pilots to come back. Hobdy said he has a bigger goal for the airport, and it is one the fly in will help.

“A lot of people view this as a fuel stop,” Hobdy said. “Our goal is to make it a destination.”

In addition to the fly in marketing for the airport, Nelson said the fly in is mainly for the public to be able to get out and see the airplanes. It is not an Air Show because it would make things complicated with the FAA, Hobdy, Nelson and Maroon said.

“We intend to do an airshow maybe later in the future,” Maroon said. “Since this is our first (fly in) we did not want to overwhelm ourselves with regulations and rules. It is a fly in, no air show. (Maroon speaking straight into the recorder) No air show”