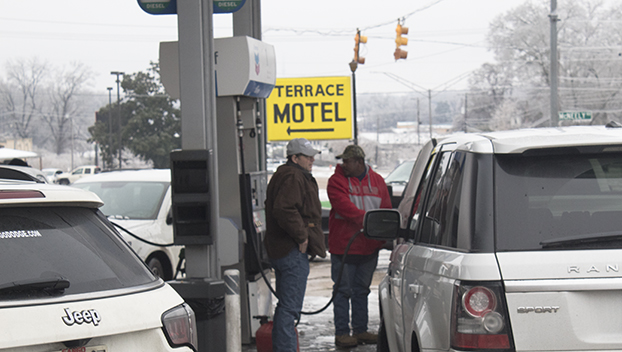 Gary Parker and Tremayene Proby converse as Parker waits to fill his gas cannister up at the Chevron on McNeely Road and U.S. 84 East on Thursday afternoon. (Hunter Cloud The Natchez Democrat)

Wheels spun on ice as vehicles shifted around in a chaotic game of musical cars.

Residents lined up at area gas stations — those that still had fuel — which was in high demand here on Thursday.

For Herman Carroll Sr., all he saw at the Zippy Foods on Old Washington Road and Lynda Lee Drive was kindness.

“One guy wasn’t even mad that I went ahead of him with my (gas) can,” Carroll said. “People are more tolerant right now.”

Herman Carroll Jr. and his dad, Carroll Sr., traveled to the gas station to get gas for their generator. Carroll Sr. said his grandchildren are staying with him during the winter storm.

Carroll Jr. said their power has been out since 4:30 a.m. Thursday. He said in his 49 years living in Natchez he has not seen a situation this bad with gas or a winter storm.

Carroll Jr. thanked Southwest Electric for working hard to keep the power on for as long as it did.

“You can’t control that stuff,” Carroll Jr. said. “We have fireplaces and a stove. We are burning wood. We are all right as long as we have that.”

At the Chevron gas station on McNeely Road and U.S. 84 East, Gary Parker was talking with Tremayene Proby as he waited in line for a gas pump. Cars snaked around the gas pumps in lines waiting to get fuel for their vehicles and to fill gas can.

Parker said he lives close to Vidalia, Louisiana, and he has not had any electricity or water since noon Wednesday. He said he came across the river because there was not any gas in Vidalia and he needs gas to run his generator.

“I was able to get some gas yesterday,” Parker said. “We had been running the generators all night and ran out. So I had to come back and get some more gas.”