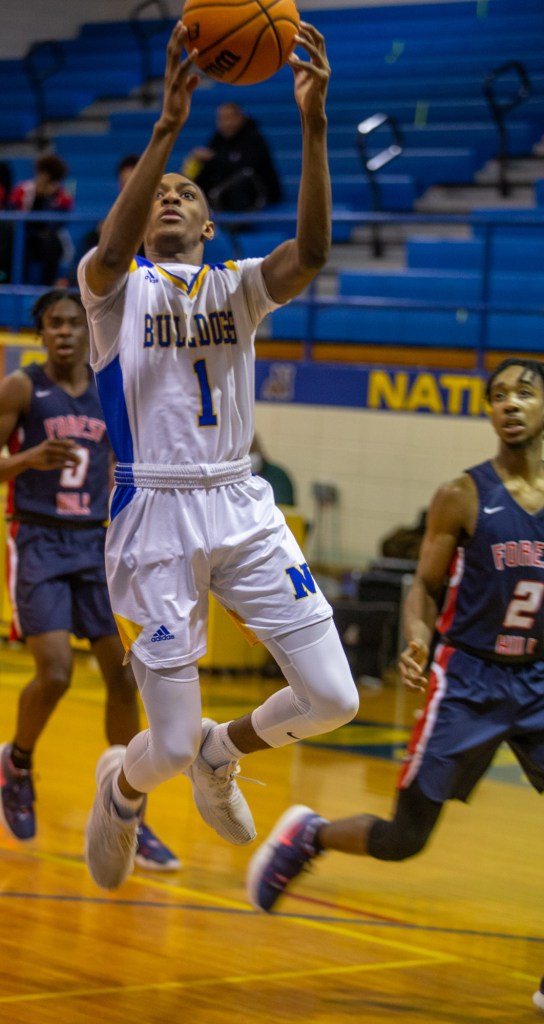 Natchez High's Travis Berry goes up for two against Forest Hill in the final game of the Region 6-5A tournament and totaled 14 points for the game. Natchez lost 61-53 in the game last Friday. The Bulldogs will take the hardwood again on Tuesday Feb. 23 in a playoff game agaisnt Hattiesburg at 3 p.m.

Natchez High School boys basketball will not take the hardwood against Hattiesburg in their first round of the state tournament this Friday night. Instead, the Bulldogs will play against the Tigers on Tuesday Feb. 23 at 3 p.m.

First round games will be played by Feb. 23 for boys basketball, and Feb. 22 for girls basketball. Natchez athletic director and girls basketball head coach Alphaka Moore said the boys game was originally rescheduled for Saturday, but the game was moved over travel concerns. She said the Lady Bulldogs would not play until Wednesday Feb. 24 at 4 p.m.

Moore said no one has been able to go to the school or they gym this week so it is unknown if the gym has any electrical or water issues. She said she would have to check out the facility to see what condition it is in.

Hayward said the team has not been able to get in the gym to practice at all and he said he is currently without power.

Before the game was rescheduled, Hayward said his team would have had no time to practice before their game which was supposed to be played on Friday. Now with the game rescheduled the team can hold practice and have a walk through on Monday.

“We are just trying to make it through this, that is all we can do,” Hayward said. “Hopefully things will get a lot better for us as far as weather conditions tomorrow. Maybe we can get in the gym on Saturday, Sunday and Monday. Have something that is similar or normal on a game week.”

Moore said the Lady Bulldogs will play the winner of the first round game between Brookhaven and Gautier.