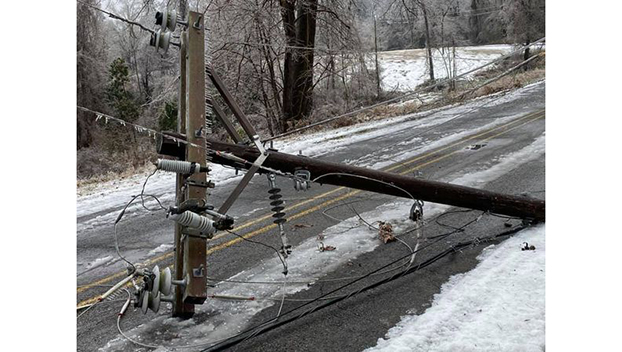 A power poll collapsed in the road. (Southwest Electric photo)

NATCHEZ — Thousands of people in Adams County lost power during and after a Wednesday night winter storm.

During a winter storm Wednesday afternoon, ice quickly accumulated on top of trees and power lines. The ice layered on top of anywhere 1 to 3 inches of frozen sleet in many places.

This caused rooftops and trees to fail throughout the county. Many reported water leaks inside their homes in addition to power loss.

Southwest Electric said it could be two weeks before all of their meters are back online after freezing rain Wednesday night took down trees and power lines.

Deb McGee, who is the public relations coordinator for Southwest, said 83% of meters in Southwest’s the nine county service area went down during the storm, including 93%, 5,263 meters, in Adams County.

By 4 p.m. Friday, 3,173 meters for Southwest’s Adams County members were still out.

As of Friday, 3,300 Entergy customers in Adams County were without power. Approximately 6,500 Adams County Entergy Customers lost power during the storm.

As linemen worked to restore power to some customers Wednesday night, more lines would go out at the same time.

McGee said it could be 14 days before all of the meters in Southwest’s nine counties are back online, mainly due to the icy roads and the amount of damage in the areas that are out.

“Every person who can be working is out there working,” McGee said, adding Southwest has recruited help from linemen in other areas to assist with the repairs once its safe for them to travel.

McGee said two crews from Electric Cooperative in Arkansas arrived Friday afternoon to assist with the outages and more crews from Mississippi were expected to arrive later in the evening.

Delta Tree and Southern Tree companies have also helped with the removal of trees from power lines and blocked pathways, McGee said.