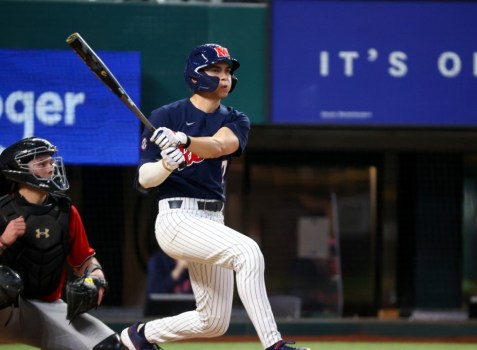 Jacob Gonzalez swings the bat in a game against Texas Tech on Sunday. Gonzalez hit his first career home run in the game, and had four RBIs in the Rebels Showdown games. (Courtesy Photo Ole Miss Athletics) 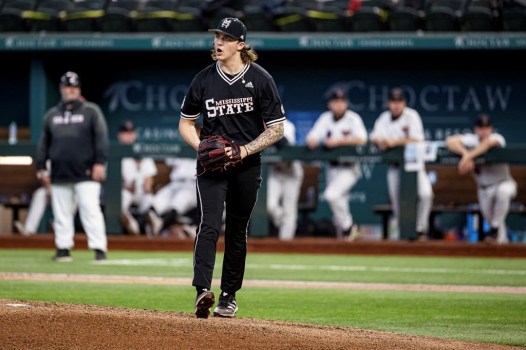 Mississippi State University’s Jackson Fristoe celebrates as he walks off the mound in a game against Texas Tech on Monday. The Diamond Dawgs beat the Red Raiders 11-5.(Courtesy Photo MSU Athletics)

Both teams from Mississippi won five out of six games with Ole Miss sweeping their schedule and MSU losing only a one run game to Texas Christian on Sunday.

The Rebels are ranked No. 1 in the Baseball America and D1 Baseball poll for the first time in program history, after they got off to a hot start beating No. 10 Texas Christian University 7-3, No. 3 Texas Tech 5-4 and No. 9 Texas 8-1.

Jacob Gonzalez provided the offensive spark for the Rebels over the weekend combining for four hits and four RBIs. He is only a freshman, but his performance at the plate led to the Rebels victory over Texas Tech on Sunday.

He also drove in a run in the Rebels win over Texas to finish out the weekend. Ole Miss did not include any quotes in their press releases about the games or earning their No.1 ranking.

The Diamond Dawgs also had a strong start to the season as the defeated Texas 8-3 on Saturday. On Sunday, the Dawgs made a charge in the ninth inning but they lost to TCU 3-2 after their rally was snapped a run shy of tying the game.

Monday’s action saw the Diamond Dawgs take the field in their black uniforms and trounce the Texas Longhorns 11-5. Head coach Chris Lemonis said he was proud of how his team played over the weekend in a press release from the MSU athletic department.

“I give our guys a lot of credit and I like the way we played,” Lemonis said. “We didn’t play perfect, and we have a lot of room to improve, but we played tough. Our guys stay engaged, they play tough and that is what I like about them.”

Rowdey Jordan and Luke Hancock drove in six runs for three RBIs each in their game against Texas Tech, but it was Jackson Fristoe who shone on the mound. he is a freshman who got his first career start after Lemonis said MSU was down pitchers.

Fristoe worked three scoreless innings of baseball.  While Lemonis could have sent him back out for an additional inning, Lemonis said he took him off the mound to keep his confidence up.

“He showed some composure [with runners on base], because they have some great team speed. I think you get a little amped [in this type of environment]. He would get 1-2 and next thing you know it is 3-2 because he is trying to throw the best strikeout pitch in the country, but he will figure that out over time.”