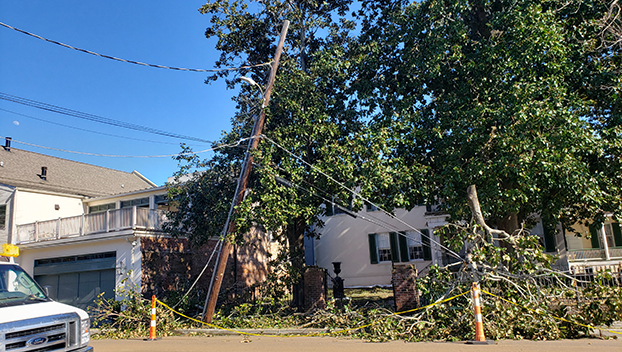 A large tree limb rests on a powerline causing the pole to lean on Canal Street. (Sabrina Robertson / The Natchez Democrat)

One week after a severe winter storm system moved through the Miss-Lou, there is still a little way to go before things seem back to normal, especially where utilities such as water and electricity are concerned.

Adams County and Concordia Parish’s water lines were drained by leaks when several pipes burst during the freezing weather. This caused water lines to lose pressure and consequentially boil advisories were issued for all area residents in accordance with state laws.

Adams County and Concordia Parish both expect to have an update regarding boil water advisories on Wednesday, Feb. 24, when results are returned from samples that were sent to the Louisiana Health Department for Concordia Parish and a Hattiesburg lab for Adams County water systems.

Tony Moon, Natchez Water Works Superintendent, said he should have results from the test samples by midday on Wednesday.

“The system continues to improve,” Moon said Tuesday, adding the water pressure should be back to normal for most residents.

“People can go back to somewhat normal water use, just don’t do anything excessive,” he said.

When a leak is found on private property, Natchez Water Works will shut off the meter until the leak is repaired by the owner, Moon said.

Mayor Buz Craft, Vidalia Police Chief Joey Merrill and Vanier continue to pass out water to area residents at the Vidalia Town Hall on Tuesday and Wednesday until normal water use can resume, Gardner said.

Deb McGee, who is the public relations coordinator for Southwest, said close to 90 percent of the meters in Southwest’s nine-county service-area went down within just a few hours on Wednesday night.

On the morning of Tuesday, Feb. 23, over 1,200 Southwest meters in Adams County were still offline and approximately 6,000 within the service area, McGee said.

“Our goal is to have every meter in Adams County back on by Saturday,” McGee said. “Some people will get power back before then. We won’t stop until every meter is back on.”

Those on the Town of Vidalia’s electrical service were mostly restored by Tuesday morning, officials said.

Most of the remaining outages in Concordia Parish are around the Town of Ferriday and Ridgecrest.