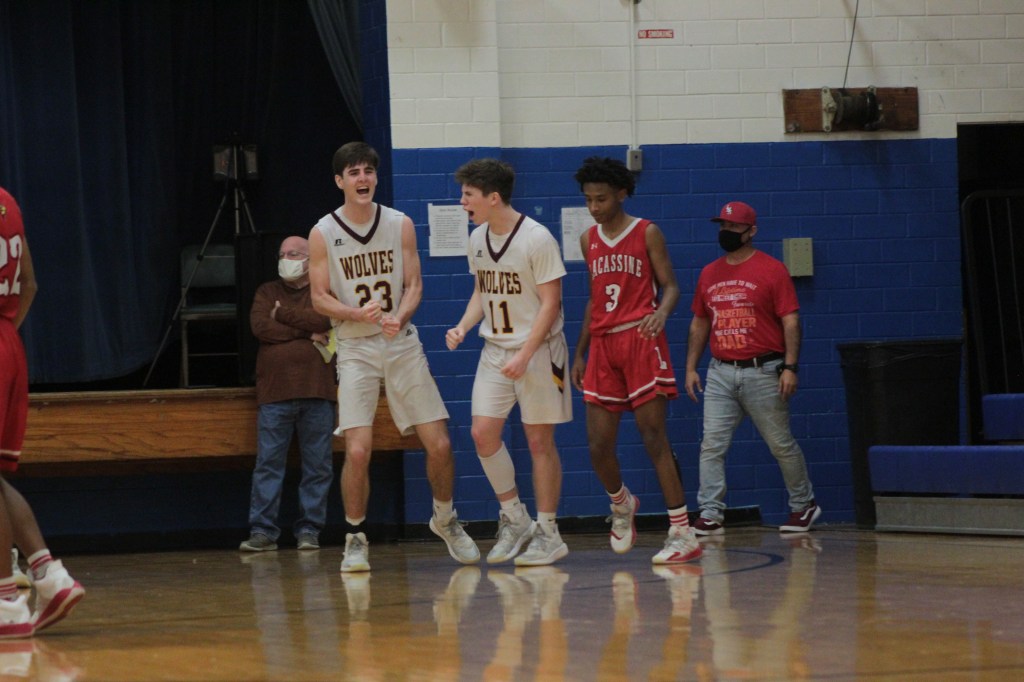 Ethan Clark said he saw nothing but the rim as he took a shot from the right key and drilled a three pointer to give Monterey the lead with 5.8 seconds left in the fourth quarter.

“I wasn’t shooting very well early, but I will do whatever it takes to get these guys to win,” Clark said. “We needed the shot, we needed the bucket so I figured I would take the shot.”

As the final whistle blew Clark let out a yell and high-fived a teammate celebrating a Louisiana High School class B playoff win as 16th seed Monterey won 39-36 over 17th seed Lacassine Friday night. The Wolves come from behind win launched them into the second round in a game against Anacoco. The game was played in Vidalia’s gym because of LHSAA’s regulations for the capacity of gyms in the playoffs.

This week was the first week Monterey had been able to get back on the court after an ice storm hit the Miss-Lou region. Before the game head coach Eric Richard said the team had a lot of rust to clean up before Clark got into the game.

“We had over a week off since our last game and nobody was in rhythm,” Clark said. “We had guys working in the yards for people (cleaning up limbs). It was good to get back to some normalcy and that is winning basketball games.”

With five minutes left in the fourth quarter it did not look likely for Monterey to win as they were down 34-24, a deficit of 10 points. Richard was pacing up and down the sideline and urging his team forward.

He said he felt like the team was down by 10 points the entire game. Lacassine had pace and a good ball club, he said. Down the final stretch of the game the Wolves made some crucial plays and knocked down shots.

“Our team needed a boost, and to be the one to give us that boost it felt really good,” Centanni said. “We stepped up when we needed to.”

A spark is exactly what he ignited as the fans started chanting and getting back into the game. There was a visible difference in the sense of urgency, yet calm approach to the game. Monterey started controlling the tempo the last minute and a half of the game and took things slow.

Clark said Centanni changed the flow of the game because until his three pointers went in the Wolves were dead in the water. He said Centanni’s shots were bigger than his and the possibility of losing the game never crossed Clark or Centanni’s minds.

“I honestly thought we were not going to lose this game,” Clark said. “None of these boys came into the game thinking we were going to lose. The bench stayed in it, and I’m proud of all of them. It was a good team win.”

This week Monterey is picking up the pieces of limbs and power lines knocked down by a winter storm. Richard said half his team was still without power this week. In the game they showed a resilience to come back, just like the community of Monterey has resilience.

“It is our makeup, whatever happens you dig yourself out of it,” Richard said. “I know it is just a ball game compared to what we have gone through the last few weeks, but we dug ourselves out of it tonight and came away with a win. I’m proud of our team.”

Centanni said the community is one that always keeps going.

“We are a community that always knows how to bounce back,” Centanni said. “I think this game right here shows who we are, and what this community is really about.”