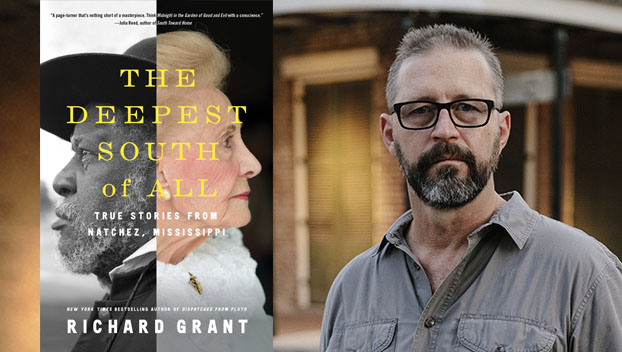 Richard Grant is the author of "The Deepest South of All: True Stories from Natchez, Mississippi". Grant spoke at the Natchez Literary and Cinema Celebration on Saturday afternoon. (File Photo)

Author Richard Grant spoke about his book “The Deepest South of All: True Stories from Natchez, Mississippi” in a Facebook Live talk for the Natchez Literary and Cinema Celebration Saturday afternoon.

His talk first focused on the tools authors need for writing about place. He said one of the rules or guides he uses in his writing is having curiosity and intrigue about a place. In Natchez, he said there is a certain time in the evening when stories begin to flow which he finds the most intriguing.

“These stories come rolling out of people that are the most marvelous, improbable, captivating stories. It seems like these stories don’t take place anywhere else,” Grant said. “The way the stories just seem to drip off of the trees sometimes. I just love that.”

Growing up in England, he said he was a big William Faulkner fan and described Faulkner’s prose as being rich and tangled. When he finally moved to Mississippi, he said the tangles and richness of Faulkner’s prose made more sense because of the landscape.

He said he tried to match the prose to the landscape he is in. So if he is writing a book about the west he would use crisp and shorter prose. Mississippi lended itself to a richer writing, he said.

“I think the richer the ecosystem the more elaborate the stories get, and the drier the place the leaner the story gets,” Grant said. “I try to pay a close attention to landscape. I love how the landscape effects your mood. If left to my own devices I would be just happy writing about landscapes.”

He said he felt about as home in Mississippi as he has anywhere else. The blues is what drew him to Mississippi the first time, but the people he said have kept him coming back.

“It just felt good being in Mississippi,” Grant said. “The individuality, the storytelling and the music..I’ll be back.”