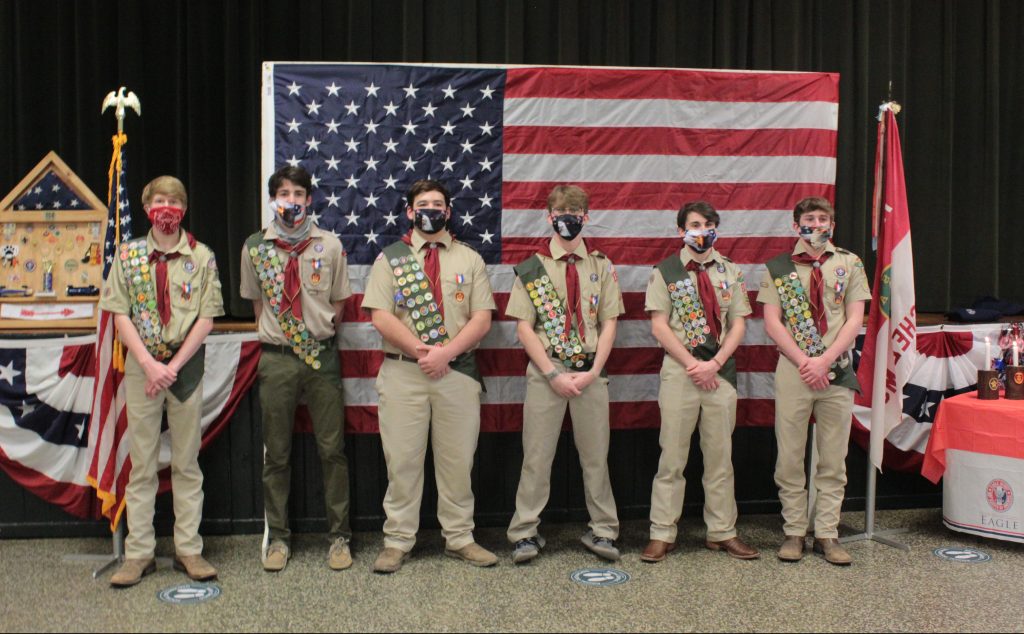 Six members of Troop 158 were sworn in as Eagle Scouts on Sunday afternoon in Natchez.

The scouts earned the highest advancement rank a boy scout can earn and joined a fraternity of more than two million boy scouts who have become eagle scouts since 1912.

Troop master Lee Best said it has been a blessing to teach and lead scouts Hayes McKay, Kyle Helbling, James Meriwether, Joseph Garrity, Landon Lynch and James Paxton Junkin to earning this honor. He said he has been their leader for the past seven years.

“These guys have gone from being cub scouts to potentially becoming community leaders,” Best said. “They have learned life leadership skills and self-reliance that much of our youth do not learn.”

He said the experience of becoming an Eagle Scout will hopefully help the six young men when the scouts graduate and follow their career paths. He said Cub Scouts become Boy Scouts in fifth grade and they earn their Eagle Scout badge typically in their Junior year of high school.

A Boy Scout has to earn 21 merit badges he said, and they must be in a leadership position in their troop for six months. In addition, they have to propose an Eagle Scout service project and pass a board of review. Best said about eight percent of Boy Scouts become Eagle Scouts.

The scouts said it took a lot of years and hard work to get to the point of being sworn in as Eagle Scouts.

Garrity said he refurbished the bleachers at Carroll Jones and Ballew-Bowlin baseball fields at Duncan Park in Natchez. Helbling said he repainted the parking spaces at Cathedral. Lynch said he constructed a new K-9 Obstacle course and hot boxes for the narcotics dogs. Lynch and Meriweather worked together on the obstacle course.

Garrity said it helped that all of the scouts worked together to make it to the point of becoming an Eagle Scout. Junkin said they had been together through everything.

“We are all in the same class,” Junkin said. “We are a pretty solid group.”

Learning and developing leadership skills, honor, service, courage and loyalty are what the scouts said they enjoyed the most about their time as Boy Scouts.

Garrity said loyalty was shown by the scouts as he and a few others finished their projects early, but he wanted to wait for his fellow classmates.

“We made a decision as a group that we wanted to wait on everybody to finish,” Garrity said. “We came up together, we all decided we wanted to finish together.”

The next step for the Eagle Scouts is to begin applying for scholarships Best said. Until a scout turns 18, they can earn advancements in order to add decorations to their Eagle Scout badge.

A scout’s service and activity does not have to stop there. Scouts have the opportunity to earn their wood badge which is the highest honor an adult scout can earn. He was bestowed the honor of earning the wood badge in a ceremony after the Eagle Scouts got their badge.

“That is a lifelong accomplishment,” Best said. “It is the best form of adult leadership training. It is a huge accomplishment, and it took me almost 2 years to complete it.”

He said he didn’t want to spoil the surprise of what all went into earning his wood badge in case any of his scouts wanted to pursue the wood badge. He said it did require hours and hours of community service.

He said it is extremely special to have six scouts of his become Eagle Scouts all at once.

“To have six guys that waited on each other to finish their projects is a huge accomplishment,” Best said. “Every person works on different levels. To have one finish and pull his teammates up. If nothing else, I have accomplished something by teaching them to do that.”