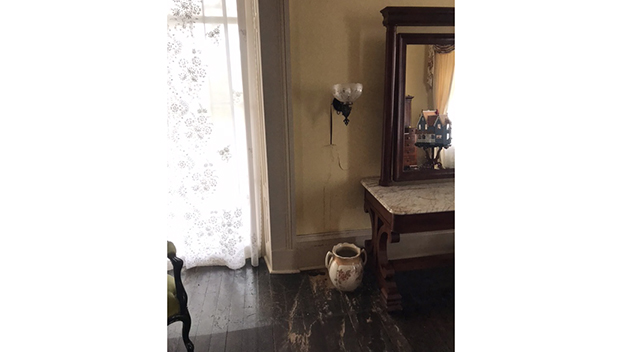 NATCHEZ — The ice storm of a century hit Natchez just a few weeks before Spring Pilgrimage kicks off on March 13.

“Crazy but true, the ice storm melting water from the gutters collected in a chamber pot in the upstairs bedroom, saving the ceiling medallion and Mr. Stanton’s desk in the downstairs library,” she said.

Stanton Hall is an antebellum Classical Revival-style mansion at 401 High Street built in the 1850s. The house was declared a National Historic Landmark in 1974 and a Mississippi Landmark in 1995.

Many of Natchez’s historic homes, like Stanton Hall, are open for tours during Spring Pilgrimage, which lasts from March 13 to April 13.

The upstairs ceiling of Stanton Hall was damaged during the ice storm, Cates said, adding it could have been much worse.

“It was a coincidence,” she said. “That pot has been sitting there for no telling how long. The damage could have been a lot worse had more water leaked to the first-floor library. Thanks to the chamber pot, the famous Cornelius and Baker ceiling gasolier and Mr. Stanton’s desk were spared.”

Cates said Donald Tucker, a plaster specialist, starts work on the repairs Wednesday, which should be finished before the beginning of Spring Pilgrimage on March 13.

Due to COVID-19, all visitors are required to wear facemasks while on the grounds of the Natchez Pilgrimage houses as well as inside.

Tours can be booked online at natchezpilgrimage.com.