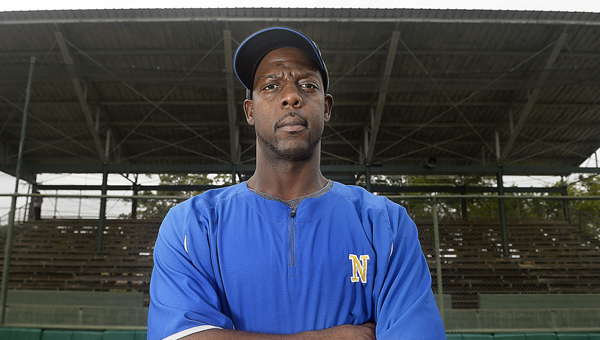 Dan Smith stands in front of Chester Willis field where Natchez High School plays. Smith said his team has kept fighting to win in every game they have played this season. (File Photo)

Fight and a determination to win is how Natchez has begun its baseball season, head coach Dan Smith said.

He said his teams have never given up despite being down late in games like his team was on Saturday against Enterprise. In the seventh inning, Natchez had a runner on first and third with two outs and was tied with Enterprise 6-6 after beginning the inning down 6-4.

He said he made the decision to squeeze bunt. He said he saw the third baseman was playing deep and because his team practices bunting regularly, he knew Koren Harris could get a bunt down.

“I looked at the third baseman and I looked at him, he gave me the sign that ‘coach I can get it down,’ so I believed in him,” Smith said. “He got it down and we won the game. I was (nervous) because the catcher fielded the ball but his throw pulled the first baseman off base.”

Eighth grader Cameron Craft crossed the plate to give Natchez the win after a three run seventh inning. It marks the second comeback win in a row for Natchez as they defeated McComb 11-10 in the second game of their double header on Friday.

Smith said he had three young players on the field who were playing in their first varsity game. He said the players got off to a slow start because of their nerves in playing in a varsity game. The speed of the game is the main difference he said between playing junior varsity and varsity.

Then the young Bulldogs found a way to get on base so the team’s veterans could drive them in, he said. He said his young players settled in and stepped up. Jwun Mackey was one of those young Bulldogs who stepped up as the freshman had two hits in three at bats and an RBI on Saturday.

“I’m just proud of them, I’m proud of the way they played,” Smith said. “The way they fight regardless of the score. They just continue to fight that is all you can ask for from a kid.”

Natchez’s game against Cathedral was canceled due to rain and will be rescheduled at a later date. The Bulldogs will be at home next Monday against Vicksburg.