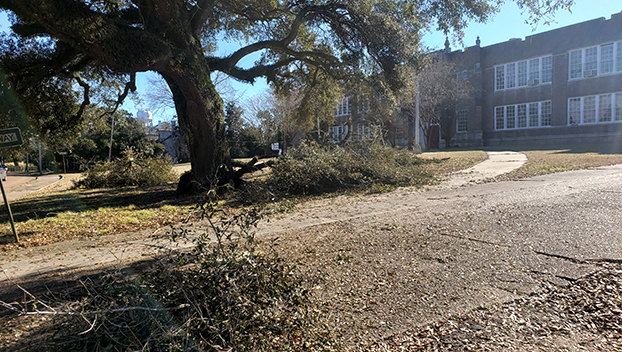 Fallen limbs lay on the ground at Margaret Martin on Homochitto, brought down by the freak end-of-February winter storm. Many limbs and debris remained piled curbside in Natchez. (Sabrina Robertson / The Natchez Democrat)

NATCHEZ — For residents of Natchez who have piles of limbs and other debris from the late February winter storm waiting to be collected, the message from the City of Natchez is please be patient.

“The companies that we have hired are working hard. Their first task has been to cut hanging limbs to ensure safety on some of our more narrow streets to assure cars and buses can move through safely,” said Natchez Mayor Dan Gibson.

City of Natchez Public Works crews are working on limb removal, too.

If homeowners have not gathered limbs and other debris brought down by the storm and moved it to the curb for pickup, the time to do that is now, Burke and Gibson said.

Both said they expect removal of limbs in residential areas will begin in earnest next week.

“We had to bring in these companies because of the overwhelming amount that came down,” Burke said.

“I think next week we will see a real difference made,” in the limb removal effort, Gibson said.

“Just be patient. There is a lot of it out there. We are working hard, city crews and contractors,” Burke said.