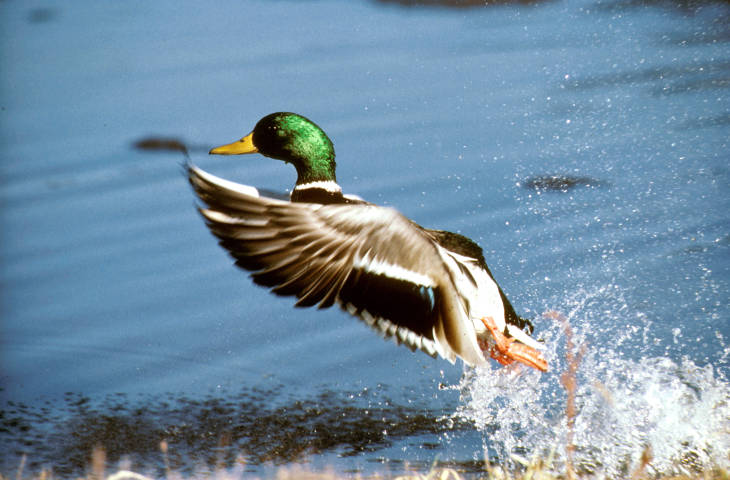 Pictured above is a Mallard taking off from the water. (Courtesy Photo U.S. Fish and Wildlife Services)

Ducks Unlimited and the MRCTI signed a Memorandum of common purpose on Thursday morning to protect and restore wetland habitats. Through the restoration of wetland habitats, Mississippi River communities will benefit as well the ducks and geese who use the river as a major flyway for their winter migration.

“I would like to tell you it is about wildlife, but it is really about people,” Holden said.

It is estimated that 40 percent of North America’s waterfowl move down the Mississippi River according to a press release from Ducks Unlimited. The press release also states that 75 percent of the wetland and riparian habitats have been lost due to flooding and droughts.

Working together to identify and promote disaster mitigation and restoration of wetland habitats is one way to substainly and naturally allow water to flood into plains that helps waterfowl and keeps communities safe.

Holden said while you cannot impact the frequency of flooding, you can impact the severity of the flooding under the memorandum. He suspects some of the focus will be put on restoring old river connections to oxbows and to spread the water out.

“We have proven to ourselves you can’t really levee your way to success,” Holden said. “That just takes your flood and makes it your neighbors problem. I’m excited about the idea. We haven’t gotten to the specifics yet, but the idea has a lot of potential.”

He said there is a notion of sustainability with this agreement that you can exist along the river and keep your children safe for generations to come. There is a lot of potential in the work that is to be done, he said.

Since 1937, Ducks Unlimited has worked to conserve more than 15 million acres for wildlife according to a press release. Natchez Mayor Dan Gibson said he has been a long time admirer of Ducks Unlimited and the work they do.

He said it is a fantastic partnership between the MRCTI and Ducks Unlimited. Taking care of the environment is important, he said, especially since the Miss-Lou region is a sportsman’s paradise.

“Natchez is here because of the river, we got to do all we can to make sure that river will continue to be a life source,” Gibson said.

CEO of Ducks Unlimited Adam Putman said it made sense for the two groups to work together on this project. More than a third of the mayors on the MRCTI are involved with ducks unlimited, he said.

The sport of waterfowl hunting brings in business to the Mississippi River Valley and Vidalia Mayor Buz Craft said habitat restoration would be beneficial to Vidalia.

“It will be bring in tourists who visit to hunt, and it will give more habitat for the waterfowl,” Craft said. “We have people who come from all over to duck hunt.”

Holden said it is exciting to see people getting on board the same train. He said he has never seen a partnership on this scale before.

“This is a movement, and to my knowledge has not been done,” Holden said. ”You have an opportunity to do a lot of projects once you can figure out what the funding mechanisms are, and the way you do it.”