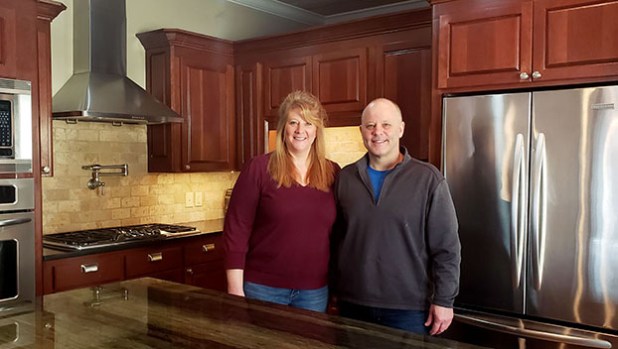 Balloon pilot Kirt Vitense and his wife Kimberly Vitense stand in the kitchen of a house they recently bought on St. Charles Avenue in Natchez. (Sabrina Robertson / The Natchez Democrat) 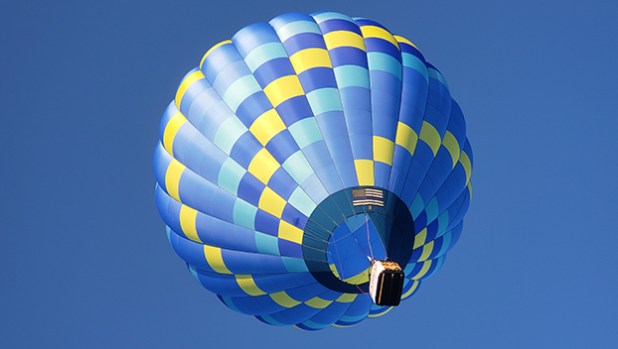 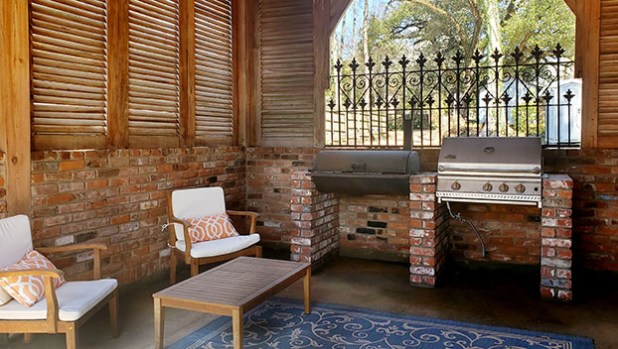 A covered outdoor seating area and grill at the Vitenses new house on St. Charles Avenue, above, provides space for socializing. (Sabrina Robertson / The Natchez Democrat) 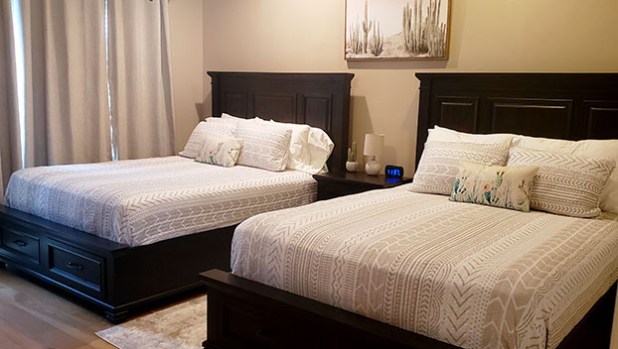 A bedroom of the house has been furnished with full-size beds for guests to use when the house is being rented as a bed and breakfast. (Sabrina Robertson / The Natchez Democrat) 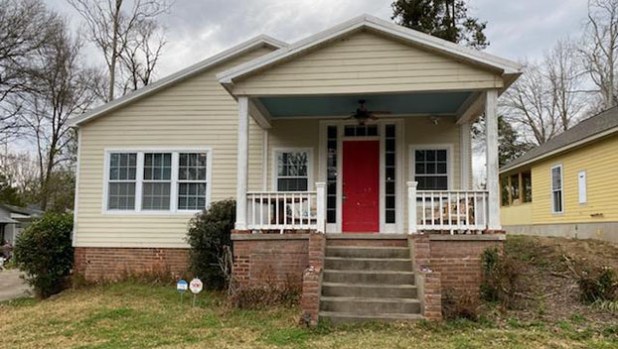 It took less than three years of being a part of Natchez’s Great Mississippi River Balloon Race for a St. Peters, Missouri, hot air balloonist and his family to make Natchez their second home.

Kurt Vitense, who earns his living as an airplane pilot for a private company, joined the hot air ballooning family in 2017 and a year later joined the roster of pilots in the annual balloon festival in Natchez.

As many places as Kurt has flown, Natchez was the only place that did not feel like going out of town, he said.

Kurt’s wife, Kimberly Vitense, said she did not take Kurt’s idea of purchasing a house in Natchez seriously when he first brought it up.

“At first I thought he was joking about getting a house here until we came and looked at it,” Kimberly said, adding she later fell in love with the house and liked the idea of having a place in the community.

“I just thought if it works out it works out and if it doesn’t, it’s no big deal,” she said. “I like being here.”

Kurt has flown two balloons in the festival — his first balloon Eden, with green and white stripes, and his new balloon Oasis, which features a spiraling pattern of light and dark blue and yellow panels.

Kurt and Kimberly arrived in Natchez one week before the 2020 Natchez Balloon Festival in October. They didn’t set out to buy a house during that visit but wound up taking a tour of the one they would eventually buy before heading back to St. Peters, Kurt said.

“There are a lot of parties during the balloon fest and we just happened to stick our head into one where somebody said ‘Kurt, you ought to buy a house here; you’re here so much,’” he said. “I actually entertained that thought.”

The house was formerly owned by Alan Moss on St. Charles Avenue and was not for sale at the time, Kurt said, adding he heard from a mutual friend that it would soon be on the market.

Kurt said the plan is to run the house as a bed and breakfast and also stay there during their frequent visits and during the annual balloon festival. Further down the road, he sees it as a semi-retirement home.

“We worked diligently over the next couple of months and closed on the house on Jan. 7,” he said, adding, “We’ve been in Natchez more this year than in St. Louis.”

While the couple didn’t actively start searching for a Natchez house in October, Kurt said he is “not one to do anything halfway.”

Once the deal was finalized, the couple set to work on fixing up the place with a modern and high-tech security system, entertainment system and new furniture.

“We want to be comfortable when we’re here and so anyone else who stays here will feel just as comfortable,” Kurt said.

The house, while it is not antebellum like others Natchez is known for, has many unique and favorable qualities, he said.

The house is not far from downtown Natchez, however, is tucked away at the end of the street in a quiet neighborhood where it is not uncommon to see a deer walking up to the front porch.

It has two bedrooms, a master bathroom with both a walk-in shower and freestanding bathtub, a full kitchen with ample countertop and cabinet space and a covered grilling and entertainment space outside next to a closed garage.

Kurt said he was sold into joining the Natchez community, both from a living and business standpoint, for a combination of reasons.

“We’ve been coming to Natchez for three balloon seasons and it has become my favorite place to fly,” he said. “I love the topography of the area, the trees the river and the bridge.”

Kurt said his favorite flight path is to take off from Natchez and fly over the river and over Giles Island.

“That to me is the perfect flight path, although taking off from Louisiana somewhere and coming up the river over Silver Street is pretty cool, too. The flying is awesome and that is a big appeal to me,” he said.

“Equally appealing is the climate, tempo and pace of life. Third, and not last, is the friendliness and hospitality of everyone here. From the first trip down here we received such a warm welcome and sincere, authentic hospitality and friendliness and that is important. We’ve got a lot of friends here now.”