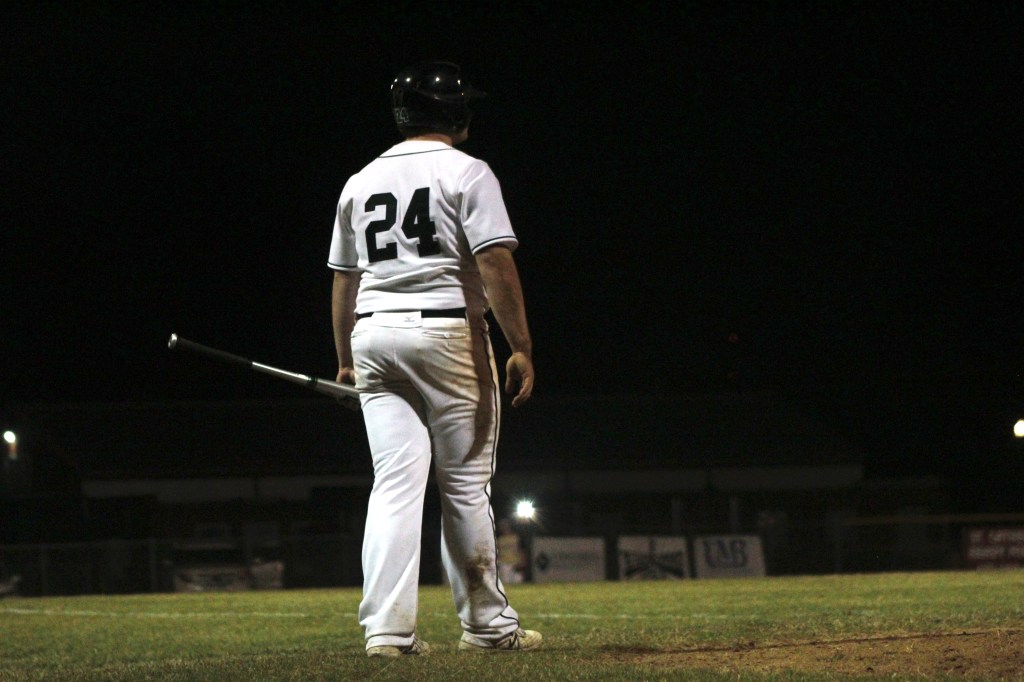 Tyler Gregg hit a double in the fourth inning to spark a seven run rally. Cathedral would win 15-9. (Hunter Cloud The Natchez Democrat)

NATCHEZ — Tyler Gregg has had a knack for coming up with big hits in key spots against good competition for the still-undefeated Cathedral High School Green Wave.

On Feb. 23, Gregg’s two-run single in the top of the fifth inning gave Cathedral the lead for good in the Green Wave’s 8-5 win at Franklin County High School.

The latest heroics occurred last Friday afternoon as Gregg doubled in two runs to break a 7-all tie and ignite a seven-run rally in the bottom of the fourth inning as the Green Wave held on for a wild 15-9 win over the Centreville Academy Tigers at Chester Willis Field.

The varsity game was originally scheduled to start at 6:30 p.m. after the junior varsity game, but the starting time for both games were swapped, meaning the varsity game got under way at 4:30 p.m., instead.

And Cathedral got off to a great start with seven runs in the bottom of the first inning off Centreville starting pitcher Brayden Malbreugh. The big hit of that frame was a three-run home run by winning pitcher Noah Russ.

“He had a big night at the plate. He had five RBIs for us,” Green Wave head coach Craig Beesley said.

Malbreugh lasted just one-third of an inning after giving up six runs, four of them earned, on three hits with one walk, no strikeouts and one hit batsman. Tigers head coach Robert Bordelon brought in Caleb Kinabrew and he kept them in the game — until he ran into trouble himself a few innings later.

After a scoreless second inning, Russ ran into trouble in the top of the third inning. He allowed four runs without giving up a single base hit. He walked three batters and hit another batter without recording an out before Beesley brought in Jake Hairston.

Hairston pitched four inning of relief and gave up three runs, two of them earned, on three hits with six strikeouts and just one walk. After the Tigers scored those three runs of him in the top of the third, Hairston pitched three straight scoreless innings.

“The main thing I want to see is our pitchers throw a lot of strikes. Hit their spots,” Beesley said. “When we get runners on base, we need to score.”

Which is exactly what happened in the bottom of the fourth. With two runners on, Gregg hit the first pitch he saw for a double to give the Green Wave the lead for good. They also got an RBI fielder’s choice from Sam Mosby, a bases-loaded walk by Hollis Lees, a run on a steal of home plate during a Russ at-bat, and a two-run double by Russ for a 14-7 lead.

Cathedral scored one run in the bottom of the sixth to go ahead 15-7 before Centreville scored two unearned runs off Tanner Wimberly, who struck out one and walked on in the top of the seventh.

“It was a good game for us. It was our last non-district game for us,” Beesley said. “We’ve got tough competition this week with Brookhaven Academy. I’m glad we’re swinging the bats better than we had earlier this season. Brookhaven Academy has a real good left-handed pitcher that we’ll see (Tuesday) night. We’re going to have to make sure we get some timely hits this week.”

As for Jake Maples’s no-hitter that he threw last Thursday night in a 10-0, five-inning home win over Porter’s Chapel Academy, Beesley said, “He threw an exceptional game. He threw a lot of strikes. That’s what we’ve worked on is throwing strikes. He did a good job of that.”

Centreville Academy (0-5) traveled to Bay Springs to take on Sylva-Bay Academy Monday night in its MAIS District 3-2A opener. Cathedral (7-0) hosts Brookhaven Academy Tuesday night in its District 4-4A opener.