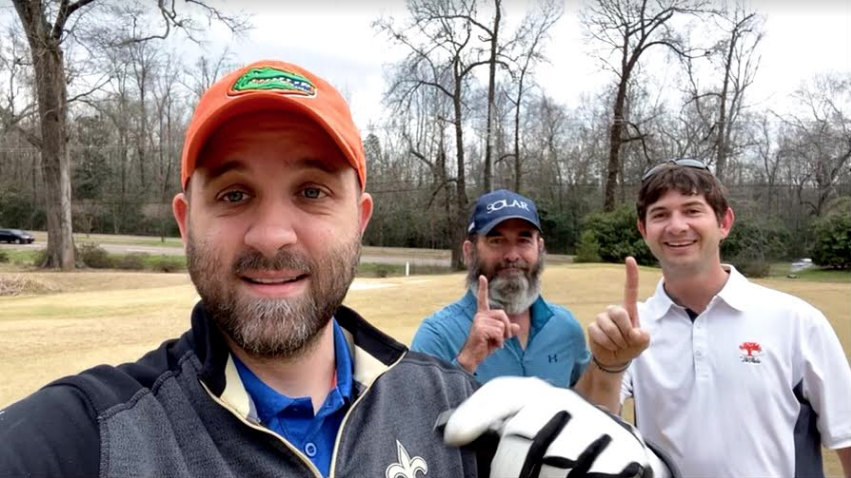 From left, Marcus Archer who made a hole in one takes a selfie with Mike Pace Sr. and Mike Pace Jr. (Submitted photo)

Crosspoint Church Pastor Marcus Archer said he had played a mediocre round of golf until he stepped up to the 6th tee at Duncan Park on Friday.

Taking a pitching wedge, he teed off and drove the ball the 133 yards to the green. He watched the ball fly over a pond and drop two feet shy of the hole. From his view, he said he could no tell how close he was to the pin until the ball rolled forward and dropped out of view.

“I’m sure people could hear us several holes away yelling,” Archer said. “I threw my club into the air. It had to be 15 feet in the air at least. Imagine the view of Tiger sinking the putt to win The Masters or something. That is all I got, one good shot in golf.”

His childhood friend and golf partner Michael Pace Jr. witnessed the shot as did Michael Pace Sr. It was Pace Jr.’s first time to witness a hole-in-one, he said. He has three of his own and said it was awesome to see one made because hole-in-ones are rare.

He said there are players on the PGA Tour who have never had a hole in one. His own father has also never made a hole-in-one. Archer said his first hole-in-one made up for an average round of golf.

Walking up to the Tee box, he said he was just thinking about not missing the green, and not about trying to ace the hole. Pace Jr. said you could shoot a 100 for the day and still feel good about the round if you had a hole-in-one.

“He wasn’t playing the best up until that point,” Pace Jr. said. “Then he made the hole-in-one, and that will turn your attitude around.”

While Archer said he does not remember when he first started playing golf, he did play in junior high and high school at Trinity Episcopal Day School. He said while he had hit some close shots in the past he did not remember walking up to a ball frustrated the ball did not go in.

On Sunday, Archer said he showed his congregation a short video making fun of himself and his accomplishment. He said his mother clapped for him but everyone else laughed at his cheesy, bragging hype video.

“It was a lot more of me being weird and making fun of my self,” Archer said. “I made fun of my friend (Michael) because he said he hit a hole in one and no one was there to witness it. I had a weird hair cut in the video. I had done something just funky to my hair that day.”

After the video, He said he moved on to preaching. As for the golf ball he hit in the hole, it has a new home in his desk.

“The ball is retired,” Archer said. “It was immediately retired.”