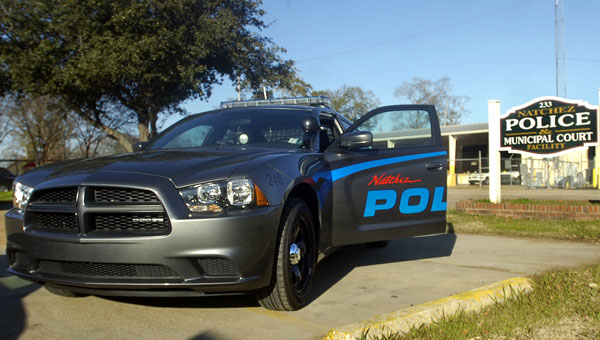 This file photo shows new patrol car purchased for the Natchez Police Department in 2012. Natchez Police Chief Joseph Daugtry said most of the department's vehicles are now 2013 models with an average of over 107,000 miles on them.

NATCHEZ — On Tuesday, the Natchez Mayor and Board of Aldermen decided to lease purchase 15 government vehicles for the Natchez Fire Department and Natchez Police Department through a Government Fleet program by Enterprise.

The program is expected to save the city tens of thousands of dollars each year on vehicle maintenance, officials said.

The cost of lease purchasing the 15 vehicles — including two detective cars and 13 patrol cars — is $150,000 for the first year and $132,000 for the following three years, Natchez Police Chief Joseph Daughtry said.

“I know the money is there and I know that this is going to save us so much money in the long run,” Natchez Mayor Dan Gibson said during the Tuesday meeting of the

Natchez Mayor and Board of Aldermen.

Daughtry and Natchez Fire Chief Robert Arrington are working collaboratively to get the vehicles they need — something Alderman Billie Joe Frazier said Natchez’s fire and police department has never done before.

“This is the first time ever in this city that the fire and police department are purchasing vehicles together,” Frazier said.

All of the vehicles would be all-wheel-drive, Daughtry said, adding that was something the departments desperately needed during the winter storm last month.

There are currently 36 vehicles in the city’s fleet, most of which are 2013 models with an average of over 107,000 miles on them, Daughtry said.

Employees add at least 15,000 miles to them each year doing day-to-day work and the department spends almost $11,000 per vehicle on maintenance, he said.

“You see why we are ready to move? We can’t continue that kind of expenditure on 36 vehicles,” Gibson said. “We won’t be leasing all 36 vehicles. We will only be leasing 15 but it is a major dent.”

With the Enterprise program, the only maintenance cost to the city would be oil changes, brake changes and tires, Gibson said.

Enterprise pulls vehicles that reach over 60,000 miles from the fleet, sells them at an auction and replaces them, officials said.

Officials said $31,000 for fire department vehicles and $84,000 for police vehicles was already included in the city’s budget and the city would have to come up with approximately $30,000 more for the vehicles.

Daughtry said he is also looking at grant opportunities to purchase a K9 vehicle for the police department separately.

“There is special equipment that goes into a K9 vehicle,” he said. “We have to protect that animal. He is a $20,000 dog and is very valuable to the department.”